Heidi talks about her home area in the United States. 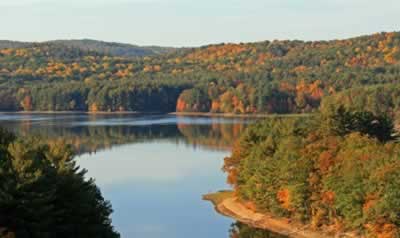 Todd: Hi! What is your name?

Heidi: My name is Heidi?

Todd: Heidi! Where are you from?

Todd: OK. Where are you from in the U.S?

Todd: OK. Ah..tell us about Connecticut.

Todd: Oh. OK. So there's lots of trees and grass and things like that. Oh nice! Where do you live now?

Heidi: I live in Tokyo.

Todd: In Tokyo! How long have you been in Japan?

Heidi: About three and a half years.

Todd: OK. That's a long time. Uh..what do you think about Japan?

Todd: OK. And you do karate?

Todd: Ka-ra-te I should say. How long have you been doing karate?

Heidi: For about a year. A little over a year.

Todd: OK. And do you have a blackbelt?

Todd: OK. Do you practice karate in the United States?

Connecticut is really nice. In the northern part. It's very country.

'It's very country' is a phrase used to describe something that has a rustic feel to it.

So there's lots of trees and grass and things like that.

'Things like that' is a phrase used to describe a group of things that are all similar to something else. We use this when we don't want to list off all of our examples, but we want to give the listener the general idea.

How long have you been in Japan?

'How long' is used to ask for what length of time something happened.

And do you have a black belt?

When you have a 'black belt' it means you have earned the highest award in a particular martial art.

Do you practice karate in the United States?

Used like this, 'practice' karate is similar to 'do' karate.  'Practice' can also mean repeating the same actions many times with the intention of improving.