Is College Worth It?

Marianne and Todd talk about how college has changed and discuss if college is still a wise choice for young people.

Todd: So Marianne, we're talking about education. And things are changing. Society is changing as it always is. But these days, you can pretty much learn anything on your own. And there is a new debate going around that colleges no longer serve the purpose that it used to. That basically, you can just learn what you want to learn without going to college. What do you think about that?

Marianne: Yes, that's a very good question. I really love this possibility of having access to knowledge just by yourself without having to attend a college for example. It's a great chance for everyone to have access to this knowledge. So I can think it's a good thing.

But I don't know why. I'm kind of skeptical because I think at some point, you have to have a time where you can exchange with a teacher or at least with other people who have the same knowledge as you. Because if you never, if you don't have this time and space where you can debate about what you learned, then there is no increase of the level of thinking. Like because you need to debate about things to learn more or maybe to correct things. 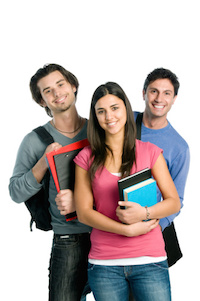 It's like the Wikipedia, right. Like it's a contributive dictionary or – encyclopedia. But everybody is writing in this page. And sometimes you see some updates but you don't know why, for example, someone made the change because you don't have the space where you can debate about is this wrong or correct about like the information that was uploaded was or correct. And if you just see the correction but you couldn't debate about this, then you cannot understand.

So I think for me, having a time and a space where you can debate is very important. And this is a place and the time that college can offer, for example, debate between teachers or debate between students about some topics.

Todd: Wow! Those are really good points. Yeah, I agree. You know, I've taught at university for a while. And I do see some of the points of being a self-learner and just basically getting what you want – getting the information you want online.

But the problem is, when you go to university, you have that void or the vacuum really. And so, you're going to fill that with all these different types of information. And you might see things that you aren't – that you didn't even know that you liked. And also, there's that social element that's really strong in college. I don't think you're going to find that anywhere else where you, you know, make friends, you make relationships that last your whole life.

So I'm still a big believer of college but I can see that maybe we need to change the model to make them little bit better.

Todd: Which brings us to another question: how do you think we can change college to make better? Like what are some changes we can make to college?

Todd: Like I have one idea. One idea I have is that we're starting to see it a little bit with MOOCs but there's no reason that you can't take a class at any other university via video from your university. So example, if you go to UCLA, you can take art classes from Harvard or somewhere else. I think that would be really good if you can start doing that. So you're not only limited to the professors on your campus.

Todd: Anything that you, looking back, you wish you could have done differently at university?

Marianne: Well the big issue about university especially in the US is that it costs a lot of money. And so, if we could find ways to – because for example, you are talking about having access to a lot of content information for free actually – I mean, for free. Like you just have to pay your Internet connection and suddenly, you have access to a lot of knowledge.

But when you go to college, it costs a lot of money. So this is a big issue actually. So if you could find a way to, financially speaking, like if we can find a way to make university more accessible to a wider audience, it could be nice. But I know it's difficult because we have to pay teachers. We have to pay all the infrastructures about university, so it costs a lot of money.

So I don't have the solution right now but I think working on this like free education or cheaper education – I mean, cheaper in a way talking about the entrance fee, not losing the quality of education. Yeah. If we can work on this point.

Colleges no longer serve the purpose that they used to.

When something serves a purposes, it does what it was intended to do.

When you are skeptical, you have doubts about something.

There is no increase of the level of thinking.

Here, a level of thinking refers to thinking intelligently.

A social element refers to a situation where people interact and socialize.

We're starting to see it a little bit with MOOCs.

We can make university more accessible to a wider audience.

When something is accessible, it is easy to enter or use.

Video 1393
Would you rather take a test or write a paper?

1395 Having Roommates
Living with other people
﻿ ﻿ ﻿
INT 6
Mariane/Todd

1391 Love in France
Relatioships and Parisians