Two people discuss the languages they speak or want to learn. 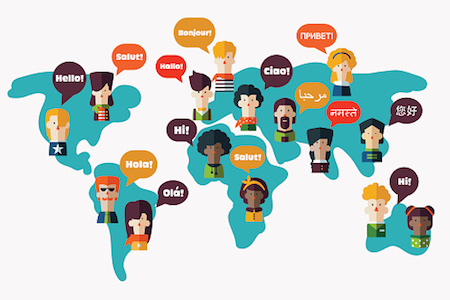 Todd: You are from Nigeria and Nigeria has many languages, correct?

Todd: How many languages can you speak?

Abidemi: I would say that I can speak one language very well.

Abidemi: And that would be English. But, I speak other languages fairly well. Yoruba, which is a Nigerian language, French, and a little bit of Japanese as well.

Todd: You are Canadian also, and in Canada, students study French, correct?

Todd: Do you speak French often in Canada?

Abidemi: While I was living there I spoke it a lot more, yes.

Todd: French, I think, is very hard for some people, myself included, because the pronunciation of some words is very different than the pronunciation of American English. I think it's funny that there are some words in French that look exactly the same as words in English but we pronounce them completely differently. For example, I will say the word in English, and you say the same word in French. Okay?

Abidemi: I will try.

Todd: Right, so that is so interesting. Again, impossible.

Todd: And they're spelled the same, correct?

Todd: Yeah, how about reservation?

Abidemi: I have never thought of it like that before, Todd, but you're right. They look the same but the pronunciations are different.

Todd: I think it's a trick because we see the word, and we know how to say it one way, but we have to say it a different way.

Todd: We just can't do that well.

Todd: So, you can speak Yoruba.

Todd: Have you ever taught that language?

Abidemi: No, never. I don't think too many people want to learn it outside of Nigeria.

Todd: I think, in the future, more people will want to learn unique languages.

Abidemi: I hope you're right.

Todd: What language do you want to learn in the future?

Abidemi: I have many that, if I had more time, I would like to learn. I'm interested in Japanese, of course. I live in Japan now, so I would like to speak it better. I would also like to learn Mandarin, Russian, Hausa, another Nigerian language, Spanish, and maybe a couple of others.

Abidemi: I know what you mean. It would make it easier to learn the language.

Todd: But in Russian, you can't do that.

Abidemi: That's true, but they have alphabets that are the same. You just have to decode them.

Todd: A little bit, yeah. We have the phrase, it's all Greek to me, which means you have no idea. Anyway, thanks a lot, Abidemi.

Point 1: The names of countries, languages, and people from a country begin with a capital letter.

I am from Germany.
He can speak French.
I love Thai fod.

Point 2: The adjective form of a country can be used to describe people, languages, and items.

People speak Spanish in Spain.
She is Italian, but does not speak Italian.
We bought a Japanese car in Japan.

Point 3: There are some patterns in English for nationalities but there are many exceptions. It is best to just remember them case-by-case.
Answer the following questions about the interview.

06 Days of the week
Two people talk about their week.
BEG 1
Abidemi Todd