Conrad loves sports. He talks a little about the sport he likes best. 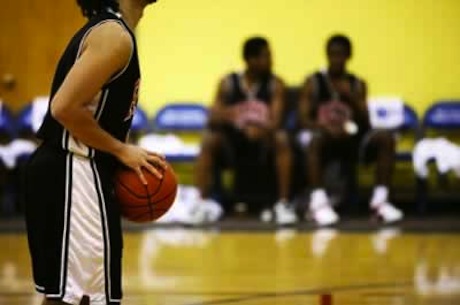 Todd: You're quite the jock!

Conrad: Well, I like a lot of sports but basketball is my favorite. Definitely.

Todd: OK. How long have you been playing basketball?

Conrad: Let's see.. Probably about thirty years. I'm thirty seven now and I think I was in elementary school when I started to play at first.

Todd: Wow, at what age were you your best?

Conrad: Let's see.. Probably around 20 maybe. Sometime when I was in college. Yeah.

Todd: What position did you play when you played basketball?

Conrad: Guard. A little bit of forward, depending on what kind of team I was playing on.

Todd: Yeah, were you mainly an offensive or defensive player?

Todd: OK. Do you still watch a lot of basketball on TV?

Conrad: Well, now living in Japan I don't get many chances to watch the NBA but I do follow it on the internet.

Conrad: Yeah. I play about once a week with my-- at the university I work at with the club team there.

Conrad: Sure. No problem Todd.

You're quite the jock.

A 'jock' is a person who is really involved in sports and fitness.  Notice the following:

What position did you play? Were you mainly an offensive or defensive player?

Living in Japan, I don't get many chances to watch the NBA.

If you 'get a chance' to something you have the opportunity to try it.  Notice the following:

I don't watch it on TV, but I do follow it on the internet.

If you 'follow' a team or a sport you check for updates and new information about the team and how they have performed in games.  "Follow" can also refer to things like news or topics of interest.  Notice the following:

[Thanks.] Sure, no problem.

We say 'no problem' when something is not a big deal or request.  Notice the following:

19 The Train Trip
Devon talks about his train trip across Russia.
﻿
INT 5
JJ

18 The Love Story
JJ talks about a time she fell in love.
﻿
INT 5
Jamie

17 Good Movie
Jamie talks about a film that he really liked.
﻿
INT 5
Conrad

16 The Jock
Conrad talks about the sport he likes best.