Ann talks about her city in Canada and what people like to do in the various seasons. 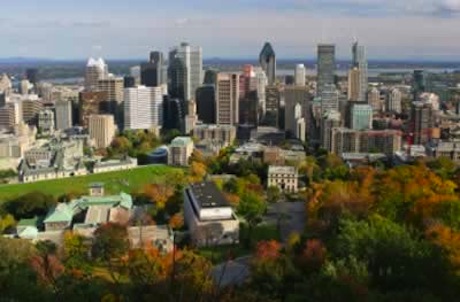 Todd: Hello, Ann! How are you doing?

Todd: Ann, could you introduce yourself and tell people where you are from?

Ann: Montreal is a really nice city. It's just very cold in the wintertime. It is.. it has four seasons and the nicest season is the summertime because it's really warm and people play a lot of sports. Tthere are some parks in Montreal and you can go swimming and hiking and biking and rollerblading. It's a very interesing city.

Todd: Wow! Were you born in Montreal?

Ann: I was born in Montreal and I can speak two languages. English is my first language but I also studied French in high school.

Todd: So, were you in a submersion program, or all your subjects in French.

Ann: No, I went to an English high school but a lot of people in Montreal are in immersion programs.

Todd: OK. Since you learned French, what do you think is the best way to learn a language?

Todd: You have your French identity?

Todd: OK. So what's your name in French?

Todd: Wow! I need to get myself a French name?

Todd: OK. Thanks a lot Ann.

Ann: You're welcome. Nice speaking with you.

You can go swimming, hiking, biking and rollerblading there.

'Rollerblading' is like skating on wheels.  The wheels are placed in a line along the bottom of a boot.  Notice the following:

English is my first language, but I also studied French.

Your 'first language' is also called your native language and it is the first language that you learn to speak when you are a child.  Notice the following:

A lot of people in Montreal are in immersion programs.

In an 'immersion program' the students are spoken to and must respond only in the language that they are trying to learn.  The idea behind this is that they will learn more quickly.  Notice the following:

If you have a positive attitude, you'll find learning another language fun rather than stressful.

I liked that I could communicate in another language, because then you have another identity.

Our identity is who we are.  The example says that by learning another language we get to become another person in a way.  Notice the following:

29 The Visitor
Leath talks about a dangerous visitor.
﻿
INT 5
Charlotte

27 Montreal
Ann talks about her city in Canada.
﻿
INT 4
Annili