Kerri answers questions about summer where she grew up as a teenager. 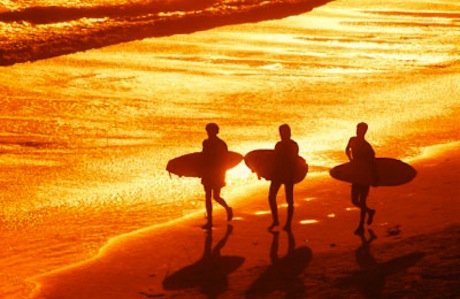 Kerri: Because it's warm, and blue skies, and fluffy white clouds.

Todd: That's true. Now, you grew up in Southern California. What was it like growing up on the beach in the summer?

Todd: Did you learn how to surf?

Kerri: I tried a couple of times but I didn't want to learn in the summer time cause the beaches are too crowded so I tried in the winter but the water is very cold so I gave up after a couple of tries.

Todd: Oh, really. Even in winter it's too cold, the water.

If a cloud is 'fluffy' it has the appearance of being very soft, like a pillow.  Notice the following:

You grew up in Southern California.

Where you 'grow up' is the place where you live for most of the time or for a long time when you are a child.  Notice the following:

It was great. It was a lot of fun.

'Great' is a positive adjective similar to fantastic or wonderful.  Notice the following:

The water is very cold so I gave up.

If you 'give up' trying to do something then you stop doing it because it is difficult and you don't think you will have success.  Notice the following:

I gave up after a couple of tries.

To be exact a 'couple' of tries means two tries, but we use this word to mean any number from two to four.  Notice the following:

115 Likes and Dislikes
Keith talks about his preferences.
﻿
INT 4
Joel

113 First Job
Roe talks about his first job and how successful he was at it.
﻿
INT 4
Diana