Anna talks about her city. 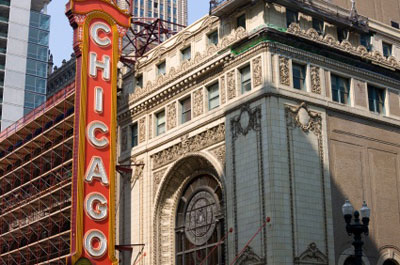 Todd: Anna. OK, Anna and where are you from?

Anna: I'm from a suburb of Chicago, Illinois.

Anna: It's very windy and flat, but there's a lot to do there. We have a lot of sports teams, things to do in the summer, lots of festivals, so...

Anna: We have a taste of Chicago festival, every summer, every year, and it's down in Grant Park, and all the food vendors, all the major restaurants in Chicago set up a food booth and you can buy, taste all kinds of food around the world.

Todd: Wow, that sounds pretty good. Ah, what kind of food do you like? What's your favorite kind of food?

Anna: My favorite kind of food is Mexican food.

Todd: Oh, yeah! And what dish in particular do you like?

Anna: You stuff it with cheese or they can put meat inside of it. It's good.

Todd: Can you make it?

Anna: No! I can not make it. I can make tacos, but that's about it.

I'm from a suburb of Chicago.

The 'suburbs' are the areas around the edge of a city.  There is usually less traffic, bigger houses and more space. Notice the following:

festival or down in

We have the Chicago festival every summer down in Grant Park.

A 'festival' is a big party or celebration and is usually outside. We use the phrase 'down in' to refer to a location that is south of where we are. Notice the following:

A 'food vendor' is a person who sells food from a small food stand or booth outside.  These 'food booths' are not normal restaurants,usually sell only a few different things and have plastic tables or chairs to eat at. Notice the following:

If you 'stuff' a pepper you put cheese or meat inside of it.  Any sort of vegetable, pasta or bread that has something inside of it is stuffed. Notice the following:

I can make tacos, but that's about it.

We use the phrase 'that's about it' to mean 'that's all.' We use this to add emphasis to our statement. Notice the following:

suburb • festival • down in
food vendor • food booth • stuffed • about it

205 The Wedding - Her Story
Anna talks about her wedding day memories.
﻿
BEG 3
Todd

204 Bats
Todd talks about his feelings about bats.
﻿
BEG 3
Todd

201 Second Family
Jessica talks about her host family in Spain.