Leo talks about the national sport of New Zealand. 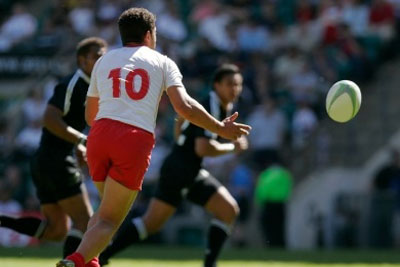 Todd: So we're going to talk about your country's national pastime.

Leo: Oh, that would be Rugby.

Leo: Uh, the All Blacks is well known around the world, especially here in Japan.

Leo: Especially if you talk to nearly any Japanese, they'll know the word All Black.

Leo: It's actually the World Cup, uh, this year, in October.

Todd: Really, where, where is the World Cup?

Leo: It's actually held in Australia.

Leo: And around, around, mainly around Sydney.

Leo: And right now is the rugby Tri-Nation Cup, which is a match between New Zealand, Australia, and South Africa.

Todd: OK. Do you play rugby?

Leo: I don't play rugby. I played rugby in school, but I actually play soccer.

Leo: Yes, yes, yes! I do support the team, and I like to watch all the games.

Leo: And I have a lot of friends here in Japan, and we get together just to watch the game. There's actually a game this Saturday. New Zealand against Australia, which is a big one.

Todd: Are you going to watch he game?

A 'national pastime' is a popular activity or hobby for people from a certain country. Notice the following:

All Blacks is well known around the world.

If most or all people know about something it is ' well known.' Notice the following:

The World Cup is held in Australia, mainly around Sydney.

If an event happens in Australia it is 'held' there. Notice the following:

It is a match between New Zealand, Australia, and South Africa.

A 'match' is a game or competition. Notice the following:

I do support the team, and I like to watch all the games.

When you 'support' a team you demonstrate encouragement and interest in their success. Notice the following:

209 The Fridge
John talks about what he has in refrigerator.
﻿
BEG 3
Kate

207 The College Diet
Alex talks about the foods he eats as a college student.
﻿
INT 4
Marion