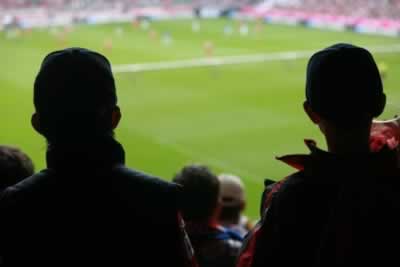 Sarah: My favorite spectator sport is football. I support Newcastle United in England.

Todd: Are they a good team?

Sarah: Yeah, I think they're pretty good. They finished fifth in the premiership this year, so they're near the top.

Todd: OK, so right now we have the Euro cup and last night England played.

Todd: Yeah, did you see the game?

Sarah: No, I was going to watch it tonight actually in Shibuya but I'm thinking maybe not now because we lost on penalties.

Todd: Yeah, what was the score?

Sarah: The final score was 2 all (2-2) and then it went to penalties and I think it was 6-4. So England always lose on penalties.

Todd: They always lose on penalties?

Todd: Well, sorry. Maybe in the World Cup, next time.

Todd: Now do you ever play football?

Todd: OK. Do you ever go and watch games in Newcastle?

Sarah: It's very difficult to watch games in Newcastle because it's a big club and it's Premiership and you have to book in advance quite a few years but I've seen some first division football clubs
play against each other.

Todd: You have to get tickets two years in advance?

Sarah: For the big clubs, yeah. They're booked up.

Todd: That's pretty intense. So when there's a game on TV then what do you do? Do you watch it at home? Do you go to a pub?

Sarah: It depends on the game. I like it and I like Premiership football and I like World Cup football and Euro 2000 but I wouldn't watch particularly a first division game on the television but normally I would go to the pub with friends and watch the game.

Todd: Do you think that athletes make too much money?

Todd: Yeah, I think it is the same thing in the States. I think they make too much money.

My favorite spectator sport is football.

A 'spectator sport' is a sport that you watch.  The example is specifically referring to a game that is fun to watch, but not necessarily play.  Notice the following:

The Newcastle United finished fifth in the premiership this year.

A 'premiership' is a championship competition in which people or teams from a number of different sporting clubs compete. Notice the following:

To be able to watch games in Newcastle, you have to book in advance.

When used like this 'book' is a verb that means to reserve something. Notice the following:

Do you think athletes make too much money?

In this case 'make' can be replaced with 'earn' or 'receive.' Notice the following:

Football players do a good job, but I think they're overpaid.

Someone who is 'overpaid' receives too much money for what it is that they do. Notice the following:

260 The Scarf
Annili gets a compliment about her wardrobe.
﻿
INT 4
Lois

257 Austria
Sarah talks about her time in Austria.
﻿
INT 4
Sarah