Ian talks about winning a special award in England. 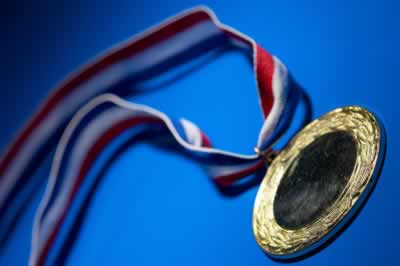 Adrienne: Hey Ian, have you ever met anyone famous?

Ian: Anyone famous? Yes, I have. I met the Duke of Edinburgh.

Adrienne: Mm, who's that?

Ian: He is the Queen's husband and I met him at Buckingham Palace.

Adrienne: How did that happen?

Ian: Well, it was because I received an award.

Adrienne: What kind of an award?

Ian: The award was called the Duke of Edinburgh Award and I completed the bronze award, the silver award and the gold award. And if you complete all three then you can go to Buckingham Palace and he gives you your award.

Adrienne: The award is for what kind of job?

Ian: OK, well it's for young people between the ages of.. I think it's 14 to 21, but I'm not quite sure and you have to do different challenges for each award. Now, for the gold award you had to do community service and I visited an old man. I had to do a sport and I played badminton. You had to do an expedition and we went hiking in the Breton Beacons in Wales for five days and you had to do a skill and I did driving and you had to do each one for a year.

Adrienne: So what was it like getting the award?

Ian: It was exciting and disappointing at the same time because my friends and I, we were waiting at Buckingham Palace for quite a long time and we had all our best clothes on our ties, our shirts, our trousers. We had very clean shoes. It was quite hot and we were waiting and we were waiting and in came the Duke of Edinburgh and he gave us our award. He asked us maybe one question each and then he went, so we only actually met him for about five minutes.

Adrienne: So it wasn't the most exciting time, meeting him a famous person.

Ian: No, he was a very busy man but you know, I shook his hand and that was it but it was nice to see Buckingham Palace and it was a good day out in London.

A famous person I've met is the Duke of Edinburgh.

A 'famous' person is one that a lot of people know because of his job or his family. Actors, actresses and singers are famous people. Notice the following:

You have to do different challenges for each award.

An 'award' is something that you win or is given to you for completing something, usually in a way that is better than other people. Notice the following:

For the gold award, you had to do community service.

'Community service' is work you do for the a certain area, like a city or neighborhood, that you are not paid for but is to help the community.  Cleaning up parks or streets is an example of community service. Notice the following:

You had to go to an expedition, so we went hiking for five days.

An 'expedition' is a trip or a journey that you make for some specific reason.  In the past explorers made expeditions to look for new territory.Notice the following:

We went to Buckingham Palace, and we had our best clothes on.

Your 'best clothes' are the nicest or most formal clothes that you have. Notice the following:

270 People
Jeff talks about the good and bad in people.
﻿
INT 4
Gloria