Eli talks about boarding school and growing up away from her family. 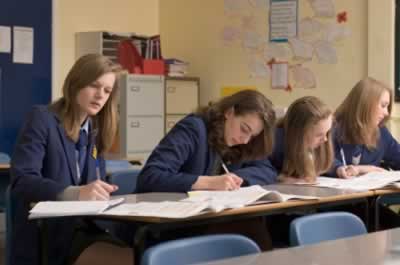 I've been at boarding school since the age of 8, which is pretty young if you think about it. The reason I went there was because my family were living abroad and they thought it would probably be better for me to go to school in England. It was really fun actually. At sort of 8 to 13, my first school, I had a great time. I loved it. I hardly ever missed my parents. We had so much to do. This school was great. They organized all these things for us to do. Obviously we were there over the weekend. Some of the kids went home at the weekend. Some of the kids went home everyday but us that had to stay over the weekend, we always had like loads of stuff to do.

There were rules obviously, but we were given a pretty free hand within the sort of school grounds. We were left to do our own thing. We had our own like common areas. We could bring in our music, we could, it was, you know, it was great and sort of the only bad memory I really have of that is having to say goodbye to my parents all the way in Holland where we lived and I would have to say goodbye to them at the end at the airport and then fly over by myself to England and get picked up by an aunt and taken to school which was, that was the only sort of thing I can remember that was bad about it, but obviously as you get older, and I moved on to my secondary school, what we call it in England, yeah, I started to like it less and less, obviously as you get older, you sort of get more opinions about things, about people, how people should be, brought up, about the sort of freedom you should be given, especially from the ages of maybe 13 to 16. You're very opinionated and think you know best, but the school I went to was very rules orientated. It was very strict, and yeah, as sort of other people of a similar age to me, started going out, you know to clubs, going out to pubs, and doing what kids normally of that age do, we were stuck at school and had to bed at like quarter past 10 on a Saturday night, which I think for a 17, 18 year old kid is pretty unnatural. It's not a very sort of, I mean at that age I don't think it's a natural environment for children to be in. When I say children, you're not really a child anymore at that age. You should be learning to, you know, cook for yourself, wash your own clothes, look after yourself, but of course all of this is done for you at school.

However, I have to say now, now that I'm living in a different country at the moment. I'm living in Japan away from all my friends, away from my family, and it really isn't a problem for me at all. I sort of just slipped into life here very easily cause I so used to living alone.

There were rules obviously, but we were given a pretty free hand.

When you are given a 'free hand' it means that you are allowed to do what you want.

do our own thing

We were left to do our own thing.

When you 'do your own thing' it means that you do not rely on rules or people telling you what to do. You do not follow the crowd.

Fly over by myself to England and get picked up by an aunt and taken to school.

When you 'get picked up' it means that someone meets you and takes you where you need to go.

You're very opinionated and think you know best.

When you are 'opinionated' it means that you have strong ideas about a certain topic.

The school I went to was very rules orientated

When a place is 'rules orientated' it means that it has a lot of regulations that need to be followed.