Heidi talks about the population situation in her country of Mongolia. 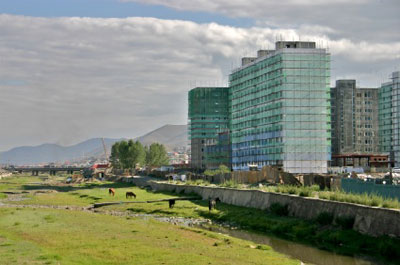 Todd: Now, Heidi, you are from Mongolia, correct?

Heidi: Yes, I am from Mongolia.

Todd: Now, your country is quite unique in that it's a big country, but you have a small population.

Todd: How many people live in Mongolia?

Heidi: It was actually two million before ten years, but now it's three million so it's getting bigger and bigger.

Todd: Wow, so the population went from two million to three million in just ten years?

Todd: Do you know by any chance of any projections about how big it will be in the future?

Heidi: Probably, it's gonna get bigger and bigger because actually our government is working for it and there is a project they call "I feel like give a birth one child" [which] gets money and probably they're trying to have more and more child.

Todd: So, if young couples, if young women have children they get money from the government?

Todd: So, is it working? I mean, do women want to take advantage of it?

Heidi: Probably it's not like because of the money, but they kind of realize that Mongolia needs more population to make Mongolia a more developed country.

Todd: So, what is the main reason why fewer women want to have children? Or women are having less children?

Heidi: Cause, definitely it's gonna be so hard for them to take care of the child. It costs a lot and this time it's kind of hard to like pay for the tuition fees and other stuff so probably women are trying to have less child because of that, but if you think about the country's development it's better to have more child so yeah, probably everyone has a different opinion about it.

Todd: Right. Actually, what age do people usually get married in mongolia?

Heidi: For the women, they get married around twenty-four till twenty-eight. For the men, they are quite late: twenty-six until twenty-two.

Todd: Has there been an increase in females or women going to college?

Heidi: Yeah, that's actually increasing because the family and parents are actually worried about their daughters so they help them to go to university, so in Mongolia, the number of universities is getting increased, so there are more chances to go to university

Todd: OK, well, that sounds quite dynamic how it's working.

Your country is quite unique.

When something is unique, it is very different, and there is nothing else that is similar. Notice the following examples:

Do you know by any chance of any projections?

Do you have any projections of how big it will be?

A projection is a guess about the future. To make a projection, you need to look at data in the present and then think about how it will change over time. Notice the following:

Do women take advantage of it?

That sounds quite dynamic?

When something is dynamic is it changing very fast. Notice the following example sentences:

projections • by any chance
take care of • quite unique
take advantage of
Answer the following questions about the interview.

345 Population Up
Heidi talks about how Mongolia is growing.
﻿
INT 4
Eli

342 Movie Critique
Todd talks about what he hates about movies.
﻿
BEG 3
Marion

341 Pets
Marion talks about her pets.