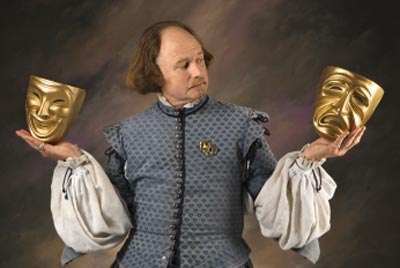 Todd: Eucharia, you are into drama so I thought we would talk about Shakespeare.

Todd: First of all, who is Shakespeare?

Eucharia: Well, Shakespeare is one of the most famous playwrights of the world. He was born in 1564 in Stratford on Avon in England which is a really pretty town and he opened the Globe theatre in London I think at some stage but the main thing why Shakespeare is so famous… he had a really short life. Back in those days to make it to 40 was considered old age but in his relatively short life he produced an enormous body of work. He produced historical plays, tragedies, comedies, poetry, sonnets… So he was an extremely prolific writer and I think the reason that he’s so famous even today is because the themes he chose for most of his work were universal. They’re themes that touch us whether we speak English, whether we speak Spanish or Russian, whether we’re in the 21st century or in the 16th century. They’re themes that are eternal and they concern humanity, and have concerned humanity for such a long time.

Eucharia: Well if Shakespeare suddenly appeared in the 21st century he would be almost illiterate because back in those days English had a vocabulary of about 150,000 words, whereas now the vocabulary of English is one of the highest in the world. I think 300,000 now, probably more, so Shakespeare wouldn’t be able to make himself understood if he came back today, so in a way the vocabulary he’s using is really easy. But of course English has changed from that era from middle English until contemporary, English keeps changing even if you talk to your grandparents, well not just English, all languages change and develop over time so even if you talk to your grandparents they’re going to use a slightly different variety of the language you’re speaking.

Todd: But wait a minute. You’re saying that his English is easy? When I read it it doesn’t seem easy, it seems pretty tough!

Eucharia: Well that’s because his English was used in a different way. So some words and some grammatical structures are no longer in English, they’ve fallen out of usage except when we read stuff like Shakespeare and then for us it seems almost like a foreign language because we don’t have these grammatical structures any more and we don’t use English in this way anymore.

to make it to

Back in those days to make it to 40 was considered old age.

Here, to 'make it to 40' means to survive or live until 40 years old.  Notice the following:

In his relatively short life he produced an enormous body of work.

A 'body of work' refers to the collection of work completed by an author or artist.  Notice the following:

He was an extremely prolific writer.

To be a 'prolific' writer is to produce a lot of works, such as essays, short stories or novels.  Notice the following:

If Shakespeare suddenly appeared in the 21st century he would be almost illiterate.

If you are 'illiterate,' then you lack the ability to read or write.  Notice the following:

fall out of usage

Some words and some grammatical structures are no longer in English, they’ve fallen out of usage.

If something 'falls out of usage,' people stop using it regularly.  For example cassette tapes have fallen out of usage since CDs were invented. Notice the following:

526 Music Man
Tres talks about his love of music and the drums.