Rina talks about the night life in Beirut. 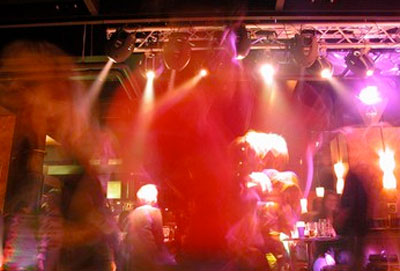 Rina: My favorite night club was rated 5th in Maxim magazine, and it's called B. O. 18, and what it used to be was a Palestinian burial ground and,

Todd: Wait a minute! (Yeah) It, there's no longer dead people there?

Rina: No, no, no. It used to be. (OK) Just during the civil war, cause there was a 17 year war, and what it is, you walk up, you don't see anything, it's just a big open space, but you see these, like, almost like subway stairs going down, and you go down these stairs and the theme inside this place is death, and it's like a big coffin, so you have red velvet walls and all the tables are little coffins with Palestinian soldier pictures on it and single rows and it's just a really good, it's a really neat club. And I went to a lot of theme clubs, too, I went to one that's called The Music Hall and it's like just, like a big theater, it was just amazing.

Rina: Um, well they had that night I went, they had five different groups: One American group, one Spanish, one Lebanese, and they all just, it's like a theater, like scene one, scene two, and each scene would be a different music, genre like, you know.

Rina: Yeah, it was cool.

Todd: So, at these night clubs, how do people dress? What's the fashion?

Rina: Um, Lebanese girls, and people that were like Lebanese girls, they're very trend conscious. Oh, yeah. Like if it's in a magazine, they're wearing it type thing. They look down on anybody, that doesn't.

Rina: Yeah, and it's all like, done up like they went to the salon that day to go out sort of thing.

Todd: Wow! (Yeah) So we're talking, like the skimpy dressed that they have?

Todd: Your kidding. What do the guys dress like?

Rina: Ah, the guys are, they dress prettier than some of the girls.

Rina: Yeah, the guys dress really well, but very, just as I said, very trend conscious. Everybody's very image, image conscious. It's really a lot like Japan in that way.

It used to be a Palestinian burial ground.

A 'burial ground' is a cemetery, or a place where people put their dead.  Notice the following:

You go down these stairs and the theme inside this place is death.

A 'theme' is a subject or an idea of a certain place or event.  In this case, the idea is death and the decorations are probably images of death.  Notice the following:

It's a really neat club.

In this case, 'neat' means cool, interesting, fun or entertaining.  Notice the following:

A 'trend' is something that is popular right now.  We use this to refer to clothes, food, activities, etc.  Notice the following:

They look down on anybody that doesn't.

If you 'look down on' something, you don't approve of it or think it's a good idea.  Notice the following:

566 Water
Al and Todd share their thoughts about water.