Michael talks about his university. 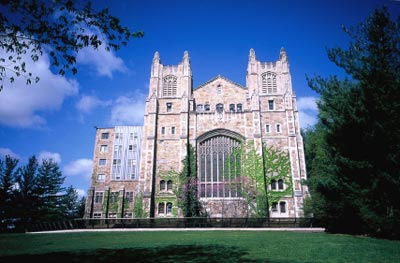 Todd: Now, Michael, I think you grew up California, right?

Todd: I thought you were from Santa Barbara.

Mike: No, no. I was born in Cincinnati and I grew up, I grew up there and I lived from my teenage
years in Michigan.

Mike: So I'm a Midwesterner

Todd: wow, I didn't know that. I thought you were a fellow Californian native like me.

Mike: No, I've been here about ten years, but not native to this state, no.

Todd: Well, so what, you lived in Ohio, Cincinnati Ohio.

Mike: And in Ann Arbor, Michigan.

Todd: Oh, you went to the University of Michigan?

Mike: Yeah, I graduated from the University of Michigan.

Mike: It's a great school. Yeah, it's huge though. I think, you know, that's one thing when you come out of high school, and you go into this huge university, it's such a different environment. Like I remember the first year, I was pretty lost in how big everything was.

Todd: Now, Michael, a lot of people don't know about American football, but at your university, the university of Michigan, football is huge. Can you describe a typical Saturday football game? Like what happens at the stadium? What do students do?

Mike: Well, yeah, the stadium at Ann Arbor, at the University of Michigan, I think it holds a 102,000 people. Something like that. It's one of the biggest in the country.

Mike: And every game is sold out. It is, it's an incredible event, so yeah, all Saturdays are abuzz with excitement for the home games, and it's just a very big deal. The whole Michigan football program just generates a lot of excitement, generates a lot of money, right, and you know, to tell the truth, though, back when I went to Michigan, I wasn't a big football fan.

Mike: I actually never went to a home game.

Mike: People ask me that and they can't believe it because,

Mike: It's such a big deal.

Mike: But you know, I was more of like a, I don't know what you call it, kind of hippie at the time, and we kind of distinguished between the jocks and, you know people who were interested in sports and the people who were interested in, what, culture of something like that, so I, at that time I wasn't into the football. I think now if I went back, I would love to see a football game.

Mike: But the Wolverines, the Michigan Wolverines, you know and a big source of pride for the University of Michigan.

Todd: Well, thanks for sharing that.

No, I've been here about ten years, but not native to this state.

If you are 'native to" a place you were born there.  No matter how long you live in another area, you can only be native to one place.  Notice the following:

Every game is sold out.

If a concert is 'sold out,' it means that every ticket is already sold.  You cannot buy at ticket anymore.  Notice the following:

We can use this word to mean something is big in size or a very important, like big deal.  Notice the following:

All Saturdays are abuzz with excitement for the home games, and it's just a very big deal.

If something is a 'big deal,' it is very important.  Notice the following:

I was more of like a kind of hippie at the time, and we kind of distinguished between the jocks and ...

To 'distinguish' between two things is to set them apart or separate them for being different.  Notice the following:

600 Buying a House
Michael talks about buying a house in the U.S.
﻿
INT 5
Michael

597 Chance Encounter
Michael talks about how he met his wife.
﻿
INT 4
Michael

596 Mornings with the Dog
Michael talks about waking up and his dog.