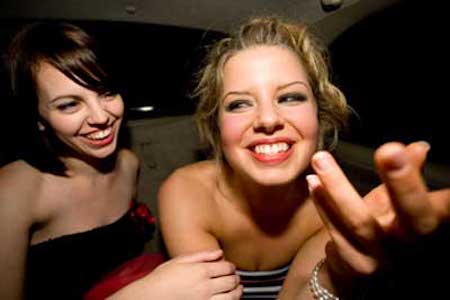 Rachel: Yeah, but, I don't know if I want to talk about it.

Wendi: I don't need any serious details, but maybe kind of like, what's the whole point of it and what typically goes on?

Rachel: Oh, OK. Well, a bachelorette.... there's usually a bachelor party.That's usually what you hear about in movies and on television, where the guys go out for one last final night out and it's supposed to be really crazy, and I guess for many years it wasn't traditional to have a bachelorette party for the girls but then, I don't know, with trying to be on the same ground, and equal rights maybe bechelorette parties came out. Basically,...

Wendi: The girls decided to kick their heels up too.

Rachel: Yeah, exactly. So the girls have decided, "Yeah, OK, well if the guys can go out and party, the girls are going to go out and party too." And, usually it's a surprise. Usually there's a limo involved in picking everybody up and of course the bride can't look awful so she's gotta think something's going on. Maybe, she's going out to dinner with her husband or something, and yeah, the girls just all go out and usually drink a lot and I don't know, maybe go to places where there's a lot of good-looking guys, and yeah, it's supposed to - I guess - make the bride feel like she's lucky that she's getting married and doesn't have to deal with this crazy insanity of single life anymore.

Wendi: I've definitely kind of experienced and seen at bachelorette parties - I've even been to a bachelore party as well but - that was strange, but I've seen...

Rachel: Hopefully not the one jumping out of the cake.

Wendi: No. No. I've seen people, like, they kind of feel like it's like getting initiated onto a sports team. It's like, they feel the right to make the person do stupid things that they would never ask them to do any other day of the week.

Rachel: It's kind of like a sorority type thing I think.

Wendi: Yeah. It absolutely is. So have you ever kind of been at a bachelorette party where the girl getting married was asked to so something kind of strange or silly or foolish or just kind of off at all - or not so much?

Rachel: I think all of my friends are kind of off, so nothing out of the ordinary but you know, my standards might not be your standards.

Wendi: Fair enough. I think that's a good answer the question. So, I'll interpret that yes.

Rachel: Hey, you know what, they say you can plead the fifth ammendment my friend.

694 Jewels, Gems, and Stones
Adrienne talks about what jewelry she likes to wear.
﻿
INT 6
Adrienne

693 Making Jewelry
Adrienne talks about making her own jewelry and how she got started.
﻿
INT 5
Adrienne