How Not To Get Lost

Greg gives advice on getting around in a foreign place. 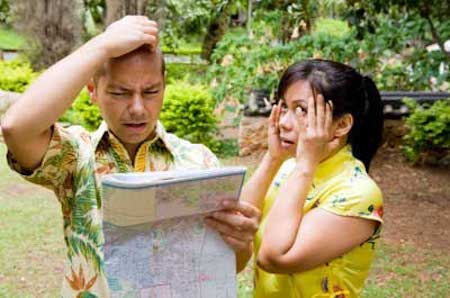 Todd: So, Greg, you are quite the world traveler I hear.

Greg: Um, yeah, I love traveling. I've been to probably around, I don't know, 20 different countries. I've lived in Thailand and South Korea and United Arab Emirates, and four different parts of Japan

Greg: And of course several different places in the U.S.

Todd: Well, for somebody who's going to travel for for the first time, what type of advice would you give them, so you know, in case they never get lost.

Greg: Ah, getting lost. (Right) Yeah, that happens all the time. You have to prepare for that. Some of the, one of the first things I do whenever I get to an airport is I see if I can get a map from the information center. I go to a hotel. I ask if they have a map of the area. When I want to go somewhere, I ask then to write the destination in the local language, and also I practice my pronunciation with them, and sometimes I'll, almost always actually, I get a business card or a match book from the hotel to where I'll be returning (right, right) and then I go off on my merry way.

Todd: OK, well, let's say that um, you're on business in a foreign country, and it's really busy and you forget to get the business card, you don't have the map, you're trying to find someplace and you're completely lost, what should you do?

Greg: Well, of course, you've got to ask people. (Right, right) and it's a good idea to ask a lot of different people because in some countries people don't want to say no, but they don't want to say I don't know, right. They give you some directions, or maybe they don't understand you, and they give you the wrong directions, so even if you think you got good directions the first time constantly check with other people along your way.

Todd: Well, so when you're going down the street, and say you are lost, is there a certain type of person you look for like let's say an old lady or children. Is there a certain person who is better at giving directions?

Greg: Um, well, if it's a child, and you want to get to a business section or something, probably they don't know. (Right) It's a good idea to ask somebody who looks as if they live in the area, and not just another, sorry, tourist passing through or something.

Todd: Right, right, right. So you're talking about people who work in shops and things like that?

Greg: Yes, and also though, delivery men are usually very good, cause they have to go all over the city, so they know it well.

Todd: Right. So have you actually ever been lost?

Greg: Oh, I've been lost all the time. Once I got lost for a couple hours in Bangkok and it was terrible.

Greg: Yeah, so after that, it gave me the idea that I should always check for landmarks, you know landmarks are really tall buildings, or a river, something I could always know, I could see easily, and try to remember, "oh the river's on my right side. Ah, there's a hill over there." Keep looking for it. Remember it

Todd: Well, it sounds like good advice. Thanks Greg.

699 How Not To Get Lost
Greg gives advice on getting around in a foreign place.
﻿
INT 5
Lisa

696 Family Traits
Adrienne talks about the different personalities in her family.