Fred, Katia and Todd talk about the many stray cats in there neighborhood. 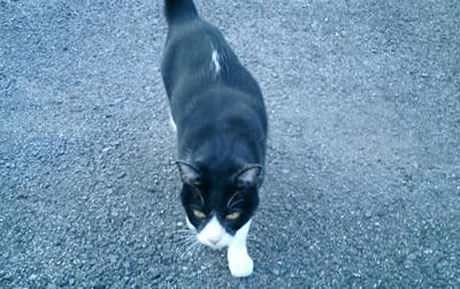 This conversation is continued from #825.

Katia, Fred, and Todd are talking about stray cats in their neighborhood and whether something should be done about them.

Katia: The first thing I would ask, what can be done? I don't think it would be fair to feed them and then just take them somewhere else. I think maybe, so they would not have more kittens, that would be something to help the problem, if there is a problem, but that's something that would be good to do.

Katia: So, it would not get so many cats.

Todd: Right, so I'm sorry, you're saying they should be left alone but not just fed?

Katia: I think not. I think once you start feeding them, it's very hard to just stop feeding them, and I think for the elderly people, it's a pleasure to do this. I see many times in the little corners, there's like umbrellas for the cats when it rains, they have a little house, so the people do like the cats and they take care of them, so it would not just be taking care of the cats and getting rid of them, but also for the elderly people, it gives them something to do, I think.

Todd: Well, that's a good point. Fred, what do you think?

Fred: I would have to agree with Katia.

Katia: What about you, Todd? What do you think?

Todd: Well, you know, I don't really have any point. I think, I do feel sorry for the cats and I do want to help them, but like you said I feel like if I feed them it's going to make the problem get worse, but I don't want to see them suffer. So, like today, there was a cat on my deck and I gave it a tuna sandwich.

Todd: Yeah. So... and it was so hungry too. Man, it ate that sandwich pretty fast, so actually, it was really sad. It was... my desk is by like the window,and it's up on the balcony, and I hear this rapping on the window and I open the window, and I kid you not, the cat, a little kitten was looking at me with sad eyes, like "feed me" and it's a stray cat, and like it knew that it could give me, just give me a sad look and I would feed it. So I did of course.

Katia: No, I think it's natural to feed them in...

Todd: So, basically the cats have us hostage.There's nothing we can do cause we feel guilty.

what can be done?

I would ask what can be done?

When we want to know possible solutions to a problem we ask 'What can be done?'  Notice the following:

they should be left alone

You're saying they should be left alone?

To say someone or something 'should be left alone' means no contact or communication at any time.  Notice the following:

It's very hard to stop feeding them.

The term 'very hard' is similar in meaning to 'very difficult'.  Notice the following:

Man, it ate that sandwich fast.

In this case, the word man is used in much the same way as 'Wow!'Americans use it a lot.  Notice the following:

The cats have us hostage.

When someone or something has us hostage, we are controlled and can't do what we want.  Notice the following: