Ivan talks about his favorite island in his home country of Indonesia. 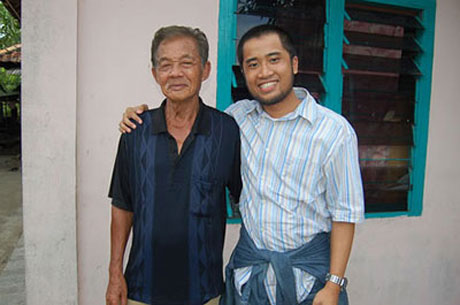 Todd: So, Ivan, can I ask you about Indonesia?

Todd: Now, Indonesia has many islands.

Todd: So, what island is your favorite in Indonesia?

Ivan: Well, I think maybe most Indonesians will say that it’s Bali, but as for myself I think that, yeah I think the most favorite one is the island where I was born, Bangka Island because, I don’t know, it’s just that it is a nice feeling if you’ve been to the place where you were born and then you just get the feeling that… you, I mean like, you get to know the real you.

Ivan: Yeah, and that’s the most important thing that I have. And recently I went there after, like, 15 years and then, really, I felt that kind of thing. I felt that this is my roots of myself and even though I stayed in Jakarta for the past 12 years or so but really being there is really my home.

Todd: Ah, you went home for the first time in 15 years?

Todd: That’s a long time ago.

Ivan: Yeah, it’s a really long time ago. But you know what, I have a driver over there and then when I went there in the last holiday I came to see him. And it’s just so nice to see… well, he’s getting older of course, he’s really old like 70 years or so but he still remembers me and how do I behave when I was a child and all. Like, I was hard to eat something and he had to take me around to make me finish my food. He still remembers the small things and it’s really giving me, like, a recall to my past and get to know who I am, who I was when I was small, so...

As for myself, it's where I was born.

We use the phrase 'as for myself' to express an opinion.  Notice the following:

You get to know the real you.

The 'real you' is how we act when we are not trying to impress other people. It's just being yourself.  Notice the following:

These are my roots.

We use the word 'roots' to talk about a connection we feel with a place because we were born there.  Notice the following:

He still remembers the small things.

The phrase 'small things' can mean details or things that don't seem important.  Notice the following: