Jeff talks about his journey before the journey on the way to the Amazon. 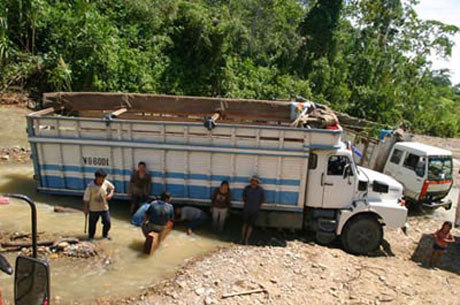 Todd: So, Jeff, we're talking about your trip across the Amazon. So you met this guy, this Russian guy, who was going to go with you across the Amazon, and you were in Lima, Peru, so how does your journey start?

Jeff: The beginning of the journey is we had to get a truck. We had to get in a truck and the roads are terrible. They're not really roads. They're dirt tracks, and because it was monsoon season, the roads were really bad - just muddy and deep mud and the rivers were overflowing across the road so... there's no buses. There are no cars. So we had to get in the back of a big truck, a logging truck, and the Russian guy and myself and say twenty peasants, Inca Indian peasants, rode in the back of the truck down the... through the Andes Mountains and then down the backside of the Andes Mountains for four days in the back of this truck.

Todd: That must have been so uncomfortable.

Jeff: Oh, it was terribly uncomfortable, and it was raining quite often during the day, so you had to pull a big piece of plastic over the back of the truck, so it was dark and wet and damp and hot and humid and the road was bumpy and the truck got stuck many times, and it was... yeah it was a real adventure.

Todd: That was for four days?

Jeff: Four days, yeah. Yep. Yep. And you'd sleep in the truck overnight, and yeah, you just... everyone had big bags of food with them so they could eat along the way cause there's no restaurants. Yeah, it was interesting.

Todd: So, in this rough beginning to the trip, did you start to think maybe you wanted not do it, postpone it and go back?

Jeff: No, I never thought that. I like that kind of challenge and adventure but you just wonder how difficult it's going to get because each day gets a little more difficult and then the truck gets in really deep mud and you wonder can we get out of this? Are we going to have to start walking and maybe wait for another truck to come along and climb into that truck, so you never... I didn't want to go back, but you just.... it's great suspense cause you never know what's going to happen on a trip like that.

Todd: And then the truck took you all the way to the beginning of the Amazon.

Jeff: Yep. It was a transport truck so it had supplies and it was going to the... to a little town at the Amazon River and then from there we transferred into a canoe, a wooden canoe and the canoe would take the supplies into the little villages along the Amazon River.

A 'dirt track' is another name for a dirt road. We often see them in areas far outside the city.  Notice the following:

The rivers were overflowing.

When a river or lake 'overflows,' that means there is too much water. It usually happens after a lot of rainfall.  Notice the following:

The peasants rode in the back.

We use the word 'peasant' to talk about poor, uneducated people usually from farming areas.  Notice the following:

The road was bumpy.

A 'bumpy' road makes a moving car, truck, bus, etc., jump up and down and traveling is very uncomfortable.  Notice the following:

We are going to wait for a truck to come along.

In this example, the phrase 'come along' talks about something we are waiting for, but don't know when it will arrive.  Notice the following:

We feel 'suspense' when we are scared or excited and do not know what will happen next.  Notice the following:

869 Along the Shore
Jeff talks about what life is like on the banks of the Amazon.
﻿
INT 5
Jeff / Todd

868 The River
Jeff talks about his journey in a canoe down the Amazon.
﻿
INT 5
Jeff / Todd

867 The Road
Jeff talks about his journey before going down the Amazon.
﻿
INT 5
Jeff / Todd

866 The Plan
Jeff talks about the beginning of his trip down the Amazon River.