Greg and Todd debate the necessity of minimum wages. 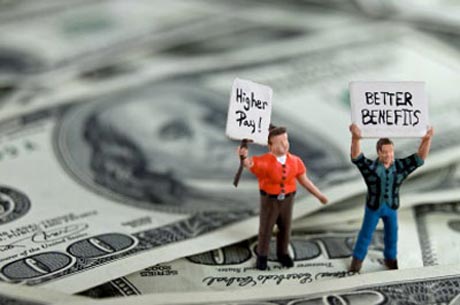 Todd: So Greg, we're talking about controversial issues and one of the issues in your book is income disparity. So, what do you think about minimum wage?

Greg: Minimum wage. Minimum wage I think is very important to have otherwise employers are going to take advantage of people; pay them too little. The society, society itself must decide what is the proper minimum wage and that in itself is an issue. What should it be?

Todd: You know, actually I disagree. I am actually against a minimum wage. I think that you know, basically all markets find equilibrium and that the wage goes too low people just won't do the job, and so basically, it you don't have a minimum wage eventually the society will come to a wage where people fell comfortable doing that work. That basically things will work out.

Greg: In theory maybe you're right, but in reality you're really wrong. I mean take a look at some of these countries around the world where there are sweat shops, where you have children, cause there are no rules regulating labor, and you have children who have never been educated, spend their entire lives working almost like slaves in unhealthy conditions. That's what happens when there are no rules to protect workers.

Todd: But I think that's somewhat true but you said the key word that they're not educated. I think the problem there is that people aren't educated and that's what leads the abject poverty that they might do a job like that. So don't you think that if people were educated more, they would not be willing to work such meaningless jobs, such jobs that pay so little.

Greg: Many of those people, those children, who are working like slaves, don't have a chance for an education and often maybe they're being exploited, not always but sometimes, by people who've had good education.

Greg: Take a child in some very poor country has to work just to find food.

Todd: So basically, you're saying they should have a living wage. That they should make enough money that they can have a decent standard of living.

Greg: Everyone should have a decent standard of living I believe.

Todd: I just think that it's really hard to arbitrarily set a price. I mean that number is always going to go up and down. That even a minimum wage is somewhat skews the reality that if you just let markets take their natural course eventually people won't be willing to work.

Greg: It doesn't work that way because when you just have a complete free market, you have corrupt people who take advantage of other people.

What is the proper minimum wage?

Minimum wage is the smallest amount of money that an employer is legally allowed to pay someone who works for them. In this case, proper means fair. Notice the samples:

All markets find an equilibrium.

Markets find an equilibrium when the supply of something is equal to how much or how many people want to buy. Here are two samples:

In theory maybe you're right.

If something is possible in theory, it should happen a certain way, but it often does not. Notice the samples:

A sweatshop is a shop or factory where employees work long hours at low wages under poor conditions. Notice the samples:

They live in unhealthy conditions.

This leads to abject poverty.

People who live in abject poverty are extremely poor. Here are some samples.

982 Getting Groomed
Tom shares what men wil do and pay to look good.
﻿
INT 4
Jess | Tom