Vella talks with Daniel about a movie she really enjoyed from her home country of Indonesia. 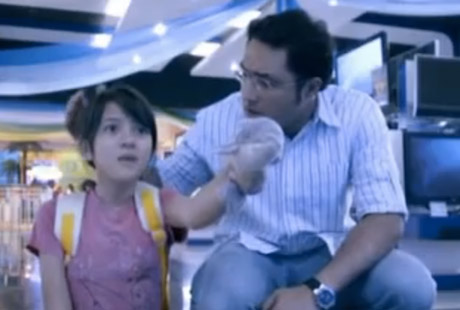 Daniel: Hey, Vella, how are you?

Daniel: I'm well thanks. Just wanted to ask you what's your favorite movie?

Vella: OK, I have one all-time Indonesian favorite movie.

Daniel: What's, what's the name of it in English?

Vella: In English the translation would be Five Women, Five Love and Five Stories.

Vella: OK, it's basically about five women with different love stories and one of them, her parents died when she was really young.

Vella: She couldn't get a better job so she ended up being a prostitute.

Vella: Yeah, it is and the second one, she, her husband had an affair with her best friend and the third one, she couldn't get a boyfriend all her life. You know, she was really struggling to find the right guy.

Vella: And I think she was really busy trying, you know, to find the guy that fulfills all her steroes, that she ends up, you know, not finding anyone.

Vella: And the fourth one, she got married only for eleven months and one day before the anniversary her husband died in a car accident.

Vella: Yeah, it was a really sad movie but, you know, you learned a lot from it.

Vella: It is. I cried actually watching it. You know, as a girl I learned a lot from it and, you know, it opened my eyes to, you know, society and how women are, you know, treated and how they experience, you know, love stories.

Daniel: OK. So how did the movie help Indonesian people to the movie? How is, did they like it, did they thought it was like only sad or did everyone thought like, I don't know, we can learn from this?

Vella: Well, I've read this website. They have, you know, many comments on the movie and I think most of the watchers were, you know, female audiences and a lot of them really related well to the movie and they really took it as, you know, a positive.

Daniel: OK. And so it's, all the stories are quite related to Indonesian kind of reality?

Vella: Well, I think people in Indonesia are more attracted to Hollywood movie just because they have, you know, better story lines and I think a lot of us are really into, you know, Hollywood actresses and actors.

Vella: So, you know, they are more interested in watching Hollywood movies.

Daniel: OK. But the Indonesian industry is still...

I have one all-time favorite Indonesian movie.

Your 'all-time favorite' of something has been your favorite for as long as you can remember. Notice the following:

It opened my eyes to how women are treated.

When something "opens your eyes", it helps you see or learn something you did not know existed. Notice the following:

Something 'depressing' is really, really sad. Notice the following:

Here, 'relate to' means that the female audience can understand how the characters in the movie are feeling, because they have had similar situations in their lives. Notice the following:

I think a lot of us are really into Hollywood actors and actresses.

If you are 'really into' something, you like it a lot and are interested in it. Notice the following: