Todd and Julia discuss the possibility now that people can work online from anywhere in the world. 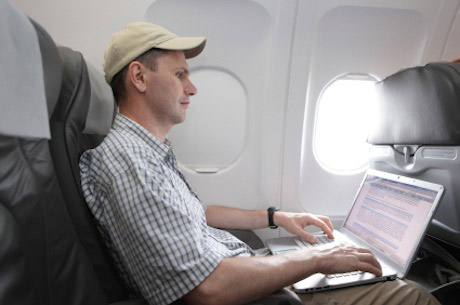 Julia: OK, so we've talked about freelancing your skills and living and working abroad. Have you ever done that? Have you ever lived and worked in a...

Todd: Yeah, I did. I did it for a year. I was actually a nomad. I lived in five different countries and I did all my work online. I mainly was just doing web stuff but it was an interesting experience. I mean I had never, I thought it would be the perfect life and when I told people what I was going to do, everybody said that's amazing. You know, I mean basically I said that I was gonna just travel the world and I would just work from whatever city I was in. I would choose my own itinerary and my own destination and I would work when I wanted to and, yeah, I did it for ten months.

Julia: And then why did you quit?

Todd: Right. You got no workmates, no-one to go out and have a drink with and after a while you really crave like social interaction and not always being the stranger, not always being the new person, like people that know your name and yeah, so after a while I gave it up. I remember the big thing that changed is one day I was in my hotel room, actually it was a little apartment, and I realised I had nowhere to go, I had no-one to see and I can go anywhere in the world. I had complete freedom. I could go to the airport and buy a ticket to Paris and go to Paris that day or I can go to Buenos Aires or Sydney. I could have gone anywhere in the world. There was nothing to stop me. No schedule, no appointments, no-one to report to and it was actually kind of frightening. Like it was almost paralyzing.

Julia: It's like standing on the edge of an abyss looking down.

Todd: It was. It was like, you know, I realized I wanted normalcy again. I wanted to have a schedule. I wanted to, you know, have the norm that I had before so I went back to teaching at university and now in my university job I have a lot of time to travel in between but just living around the world going from place to place, yeah, it wasn't so great.

Julia: Well, I think it's great that you had the chance to explore this option. I'm sure everyone would benefit maybe from trying it and then working out what it is they really value because I'm sure we all think wow freedom, absolute freedom, isn't that like the ultimate goal but then when you have it, you realize well actually no, some of those constraints that I had were quite good.

Julia: They gave me a sense of being or they give structure to my life or meaning to my life.

Julia: No, and I guess ten months is a long time maybe that's the only thing, enough of a...

Julia: But it sounds cool though. I can see the attraction definitely.

For a year I was actually a nomad.

A 'nomad' is a person who has no permanent place to live and travels from one place to another with all of his things. Notice the following:

I would choose my own itinerary and my destination.

An 'itinerary' is a detailed plan for a trip. Notice the following:

After a while, you really crave social interaction.

You 'crave' something when you really want it. Notice the following:

I had no one to report to and no schedule.

You usually 'report to' someone, like a boss, and tell him what you have been working on. Notice the following:

When something is 'paralyzing,' it makes you feel like you cannot move or act. Notice the following:

It was like standing on the edge of an abyss and looking down.

An 'abyss' is like a very deep canyon, where you cannot see the bottom. Notice the following:

I finally realized that I wanted normalcy again.

'Normalcy' is a general feeling of being normal and having a normal routine. Notice the following:

Everyone would benefit from trying it and working out what they really value.

What you 'value' is what is important to you. Notice the following:

not all it's cracked up to be

I'm not saying it's not worth it; it's just not all it's cracked up to be.

When something is 'not all it's cracked up to be,' it doesn't live up to your expectations. It's not what you expected, and you are disappointed. Notice the following:

1249 Life on the Road
Todd talks about his time as a digital nomad.
﻿
INT 6
Julia Todd

1246 Outsource on the Small
How things can be outsourced.