Sarah talks about her home state of North Carolina and things it is famous for. 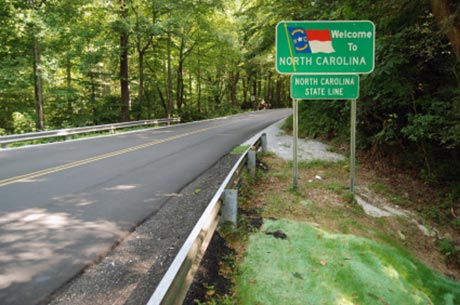 Peter: So Sarah, you said you're from North Carolina, and I've never been there before, I have no idea what it's like. Is it in the north of America or tell me more about it, I have no idea?

Sarah: Well, it's funny because it has north in the name, North Carolina, but it's actually in the south, the southeast. So I usually tell people it's on the opposite end of the US, than California. And it's halfway beween New York and Florida.

Peter: Okay, that puts it on the map for me. Tell me, what's the weather like over there, what's the general climate like?

Sarah: The weather is very moderate, it gets pretty hot in the summers and pretty cold in the winters. But it depends on where you live, because North Carolina has both the mountains and the ocean as well because it's on the coast. So if you live on the coast side you get more warm temperatures and obviously no snow. But if you live on the mountain side then you get more snow and less hot weather.

Peter: Okay. Why do people make a distinction between North and South Carolina, I mean what's the history behind that?

Sarah: I believe it's because they used to all be one together before they were divided. And so when they divided into two states, they call it north now and south.

Peter: What's North Carolina famous for, I mean what can we look out for?

Sarah: Probably the most famous thing, that is written on our license plates on the cars is 'First in Flight', because Wilbur and Orville Wright flew the first airplane in Kitty Hawk, North Carolina.

Peter: Is there famous food from that area, anything else that is really quite popular with people in America or outside?

Peter: What goes in it, what?

Sarah: It's just tea - black tea and sugar and then usually we put lemon in it as well.

Peter: Growing up in North Carolina and living there, did you ever wish to live anywhere else, or do you think it's one of the best places to live?

Sarah: When I was growing up there I always thought other places would be better. But then when I went away and lived in many other states and countries I began to see the beautiful things about the area, the country that I come from, so.

Peter: Right. I guess that's always the way with travelling and somewhere else, you realize home has got many advantages and many beautiful places.

I usually tell people it's on the opposite end of the US.

The opposite end is the other side. Notice the following:

It's on the coast.

On the coast is next to the ocean. Notice the following:

Why do people make a distinction between North and South Carolina?

To make a distinction is to show a difference.Notice the following:

the history behind (that)

What's the history behind that?

The history behind (that) is the story about something. Notice the following:

What's North Carolina famous for, I mean what can we look out for?

To look out for is be aware of or try to notice something. Notice the following:

opposite • coast • distinction
history • look out for