Felipe talks about Ecuador, a region rich in culture with people with different traditions.

Felipe: Well, that’s a really amazing topic we can talk about. Yeah. Well, Ecuador is really interesting because it has a lot of ethnic – many, many different ethnic groups. For example, depending on the regions, you know, for example in the coastal region, we have the Montubios ethnic group who have their own, you know, traditional language and food.

In the highlands, we have the Quechua communities, who speak, you know, Quechua, which is a language originally from Peru from the Inca Empire. And if you travel to the Amazon region, you can find many different kinds of ethnic groups such as the Huaoranis who live in the jungle, you know, in the Amazon region.

And you also can find Afro-Americans, you know, people who came from Africa in the 16th Century who live in the north part of Ecuador. Though they don’t have the traditional language, they have traditional food and they have created their own, you know, music and many different traditions. 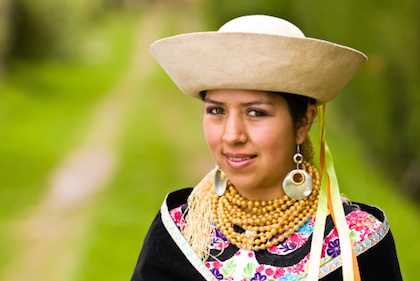 Katia: That is amazing. How can that happen in such a small country like Ecuador, have so many differences, cultural differences?

Felipe: Yeah. That’s because of history, you know, because if you look at the history of Ecuador, it’s quite diverse. You have that in the 16th Century, Spanish people came and they brought a lot of culture and this culture is now mixed with the indigenous culture because originally in Ecuador, some – I don’t know – 10,000 years ago, indigenous people have been living there. So that when Spanish people came, they both shared their own cultures.

And also, you know, the Afro-American from Africa, they brought a lot of music and traditional culture from Africa. So that’s the reason why you have a lot of diversity. It’s really, really enjoyable, Ecuador.

Katia: That is so interesting. Really, thank you for this information. I think it’s going to be really helpful for my paper.

I’m doing that paper on cultural diversity of Ecuador

Diversity means a lot of variety, especially about people. Notice the following:

We have the Quechua communities, who speak Quechua.

A community is a group of people with a common connection. Notice the following:

You can find many different kinds of ethnic groups.

An ethnic group is a group of people from the same race or country. Notice the following:

They live in the jungle.

A jungle is a forested area with hot, humid weather. Notice the following:

Indigenous people have been living there.

Indigenous means originating naturally from some place. Notice the following:

They brought a lot of music and traditional culture from Africa.

Traditional culture is culture passed on from generation to generation. Notice the following:

Video 1358
What musicians or singers do you like?
INT 4
Lisbeth

Video 1357
What languages are spoken in your country?

1360 His Life in Japan
Warren talks habits he started in Japan.
﻿
INT 6
Antoinete-Warren

1356 Baby on Board
Handing a baby while flying.