Rory and Abidemi talk about foods they think are strange for most foreigners. 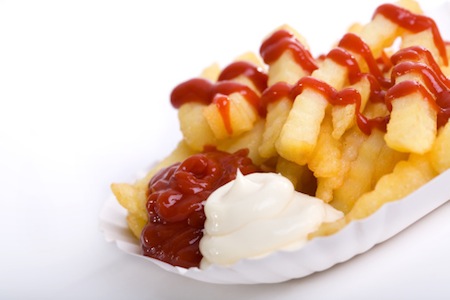 Rory: So I was thinking about food in different countries.

Rory: Okay. Some countries have foods which other countries seem to find a bit strange. Okay. Something in England which people find quite odd which we think is perfectly normal is do you know lasagna?

Rory: In England, if you go to a pub, it’s always served with chips – French fries. So lasagna and French fries together.
And people just seem to think this is weird, but in England it’s completely normal. So I was wondering if you’d come across anything similar to that in countries you’d visited or even in your own country. 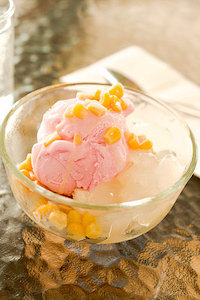 Abidemi: All right. I think for me, when I was in Japan, I had – they have the combination of bread and noodles. So they would have noodles inside of bread, which to me is strange because it’s carbohydrates plus carbohydrates.

Rory: Well, that’s quite similar to lasagna and chips, isn’t it?

Abidemi: You’re right. You’re right. I would expect bread with hamburger or something more proteinous. But yeah – so that’s strange. And I’ve also heard in Thailand, they have corn on ice cream.

Rory: Yeah, I tried that.

Abidemi: How was it?

Rory: It was strange. It was really strange because like in England, we always think corn is something you have with your main course even though it’s very sweet. But actually, it matches quite well with ice cream, but it looks strange because it’s unexpected.

Abidemi: Interesting. Interesting. Maybe a bit like in Japan – back to Japan again, where they have mayonnaise on their pizza. And at the beginning for me too it was very strange when I first tried it. But now, I think from that experience, I’ve grown used to put in mayonnaise on my pizza, and actually love it.

Rory: Okay, yeah. I haven’t caught to that one yet.

But I know when I went to Belgium, in Belgium, they always have French fries with mayonnaise.

Rory: And again, when I first tried it, it seemed very strange because in the UK we always have chips with ketchup.

Abidemi: Yeah. I think so, too. I think what I like is French fries, mayonnaise, and ketchup.

Rory: You mix the ketchup and the mayonnaise.

Abidemi: I do, yes. You should try it sometimes.

Rory: I will try it, but I do think that’s a bit strange. Okay.
So in Nigeria, are there any foods, which to you are normal but maybe you think people from other countries might find a bit strange?

Abidemi: I think the whole idea of eating with their hands, and also the fact that we eat a lot of – I don’t know how say it, describe it but solid food, we call it.

Rory: Right. So a yam is a type of potato?

Abidemi: A cousin of potatoes, I would say. Kind of but it’s starchier than potatoes. So we have a lot of food that’s made in that way. So to people that might not be used to that, they find it quite strange that we’re eating something so starchy and thick. So I think we have that.

Abidemi: One thing that’s strange to us from the Japanese side is eating raw food.

Abidemi: Like raw meat or raw fish, raw fish especially. For us, even vegetables, we don’t – that’s another thing actually. And almost anything that’s raw, we don’t really like. I remember the first time I had salad. It was “What is this? Am I an animal? Why am I eating uncooked carrots or lettuce?” So it needs to be cooked.

Abidemi: Maybe it goes back to our history. If you don’t cook, we didn’t have a lot of refrigeration so maybe we’re still in that mode a little bit. If you don’t cook it, it’s not as healthy. So we always want to cook it and make sure it’s hot or spicy.
So I think maybe that would be it. Raw food, raw vegetable, we’re still kind of like, “No,” I think.

Rory: So one thing, when I first came to Japan, I used to – I mean, in England, people often eat rice with something else. So they might put soy sauce on it. They might have it fried, like an egg fried rice or something. And it was strange for me to eat plain rice when I first came here.

Abidemi: Actually, I had a similar experience too when I was in Japan. I remember the first time they served me rice, just plain rice. In Nigeria, maybe now it’s changing a little bit, but in Nigeria, eating plain, white rice is the epitome of poverty. You have no money; you have nothing but plain rice.
So for me, it was like, “Whoa, what is this? This is really strange. I need to put something on this rice.” And when I did that, I think I kind of like saw the Japanese people around me…

Rory: Yeah. They never do it, do they?

Abidemi: No, they don’t. Yeah.

Rory: The other thing is if you put soy sauce on rice, it makes it really difficult to eat with chopsticks.

Rory: Yeah. So in England we just use a fork. I think if you use the fork for your rice in Japan, probably, also you might cause a bit of a scandal.

Abidemi: A little bit. I think the longer you live in that country, the more you’re expected to eat chopsticks, right?

Abidemi: At least, you’ll be able to. Yeah. But now I think I’m more used to it. I can eat white rice with something on the side, of course. But not necessarily with the sauce or something on top of it. Yeah.

When something is completely normal, people do it often, and without anyone thinking it is strange. Notice the following:

Food made from grains such as bread and noodles are high in carbohydrates. People often use the term carbs instead of carbohydrates. Notice the following:

It looks strange because it’s unexpected.

Something that is unexpected is surprising. Notice the following:

We’re still in that mode a little bit.

Your mode is your mindset or way of thinking. Notice the following:

Rice is the epitome of poverty.

An epitome is the strongest example of something. Notice the following:

When you cause a scandal, you get people gossiping about something, or looking at your actions with disapproval. Notice the following: