Devon talks about his train trip across Russia. 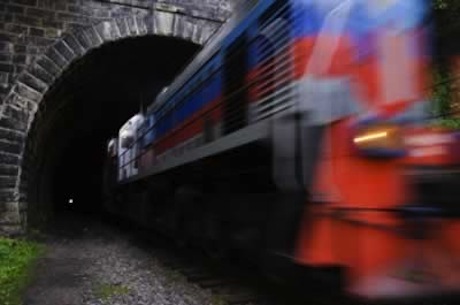 Todd: Devon, I hear that you took the train across Russia.

Devon: Yes. I started in Moscow travelled through Russia, Mongolia and ended up in China.

Devon: Yes, it was. It took three weeks. I did it as part of a tour with 10 other people.

Todd: Man, that's a cool trip. That must of cost a lot of money.

Devon: It did cost a lot of money but not a lot of people can say they have done that. I looked in, I researched the trip several months before I actually took it. A friend and I did it together and there was one other American and the rest of the people were from Switzerland.

Devon: A lot of it was flat and for miles around you could see absolutely nothing and as you got into Siberia there was scattered trees. When we got into Mongolia you could see some Camels every once in awhile but besides that there was a whole lot of nothing.

Devon: Wild Camels around the drinking hole. Yes, saw that more than once.

Todd: So how did you eat on this train?

Devon: We stopped several times along the way and upon every platform you could buy food that local people were selling. A lot of it consisted of dried fish and other types of Russian delicacies and a lot of noodles that you heat it up with hot water. Every train had hot water on it on every carriage so you were always able to make noodles if you were desperate.

Todd: So was this a luxurious train or was it a pretty basic...?

Devon: It was pretty much the most basic you could get. There were no animals on board but sometimes they were coal-heated so it was very basic.

Todd: Wow! Would you do it agian?

Devon: Great question. Would I do it again? Yes, I would do it again but I would wait several years to do it. One because it does cost a lot of money and two because there are many other things to do, to see.

Todd: OK. Thanks a lot Devon.

I started in Moscow, traveled through Russia, Mongolia and ended up in China.

If you 'end up' in a place it is your final destination.  It is where you stop traveling. Notice the following:

I looked in, I researched the trip for several months before I actually took it.

When you 'look into' something you find out information about it, ask questions and do research.  Notice the following:

Wild camels around a drinking hole.

A 'drinking hole' is literally a hole in the ground that has water in it.  Notice the following:

Sometimes they were coal-heated which is the most basic you can get.

When the black rocks, 'coal', are burned to make heat, whatever they are heating is 'coal-heated.' Notice the following:

For miles around you could see absolutely nothing.

When you 'see nothing' it means that there is absolutely nothing to look at. Notice the following:

19 The Train Trip
Devon talks about his train trip across Russia.
﻿
INT 5
JJ

18 The Love Story
JJ talks about a time she fell in love.
﻿
INT 5
Jamie

17 Good Movie
Jamie talks about a film that he really liked.
﻿
INT 5
Conrad

16 The Jock
Conrad talks about the sport he likes best.

Complete the sentences with the words below.
ended up • looked into • drinking hole
coal-heated • see nothing