Nobu is an expert in maritial arts. He talks about the art he specializes in. 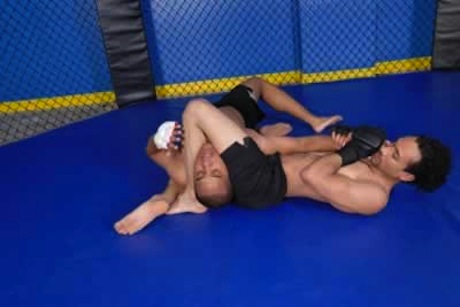 Can you tell me about K1?

Ann: What are you best at? What do you like practicing?

Nobu: I am very good at grappling. Grappling is the type of sports that you kill your opponent's joint and choke him out or anything like that.

Ann: Do you use your hands or your feet a lot?

Nobu: Hands, feet, legs, every part of your body.

Nobu: No biting. No biting, no fish-hooking, no groin striking.

Ann: What is the fish-hook?

Nobu: The fish-hook is a kind of illegal movement that you use two fingers. Point finger and middle finger hooking your nose or eyes. Like that!

Ann: Do you ever compete?

Nobu: Yes, I compete a lot. Actually, I was a champion back in the States.

Ann: In the States?

Ann: What kind of champion were you?

Ann: Grappling champion. What did you win?

Ann: All right, that's great! Thanks a lot for that.

'Mixed martial arts' is a combination of many different types of martial arts like boxing, kick boxing and wrestling.  You can use many methods to defeat your opponent.  Notice the following:

There are no holds barred in mixed martial arts.

If something is 'no holds barred' that means there is no holding back, almost anything is acceptable.  Notice the following:

Grappling is the type of sports where you kill your opponent's joint.

To 'kill someone's joints' it to hit them in such a way in their joints, such as the knee, shoulder or ankle, that they don't function properly or collapse.  Notice the following:

In grappling, you also try to choke your opponent out.

If you 'choke' someone you restrict his airway so he can't breathe.  Notice the following:

Fish-hooking is an illegal movement in grappling.

'Fish-hooking' someone is to use your first two fingers like a hook to dig at your opponents eyes, nose or mouth.  Notice the following:

Complete the sentences with the words below.
martial arts • no holds • the joints
choke out • fish-hook