Kevin talks a little about life in his home country of Wales. 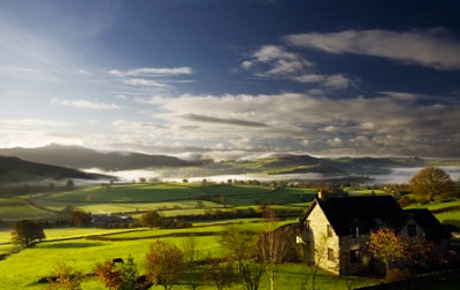 Todd: OK, Kevin, we're back. Could you talk a little bit about Wales.

Kevin: Yeah, Wales is quite a small country. It's west of England. There are about four million people who live in Wales. It's a bit like Japan. It's quite cold in the winter. Not much snow. But lots of sheep there.

But it is a very beautiul land. Lots of mountains. So I like it.

The weather is cold. Even in summer it is not too hot. So if you do surfing or windsurfing, which I do, you have to be very very brave. Yeah, but please come and visit Wales.

Wales is quite a small country.

Used in this way, 'quite' can be replaced by really or actually.  We can use this word to demonstrate contrast between fact and what people usually believe.  Notice the following:

Wales is quite a poor area.

A 'poor area' is an area where people don't have a lot of money.  Here the houses, buildings and streets may not be very nice and it can also be more dangerous.  Notice the following:

A lot of people in Wales are farmers.

A 'farm' is an area outside of the city where there is a lot of open space and farmers grow fruits, vegetables or grains and raise animals to sell.  Notice the following:

A lot of people in Wales mine for coal.

A 'mine' is hole in the earth where people dig for minerals,  metals or precious stones.  Notice the following:

You have to be very brave to surf in Wales.

To be 'brave' is to not be afraid of something that would scare most other people.  You can also be brave in a difficult, but not necessarily dangerous situation.  Notice the following:

Complete the sentences with the words below.
quite • poor area • farm
mines • brave