Keith talks about things that he likes and dislikes. 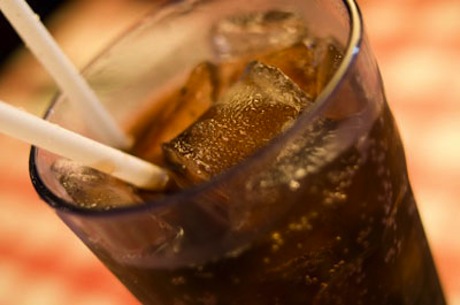 Todd: Hey, Keith, what is your favorite food?

Keith: My favorite food? Well in Japan it's probably sushi.

Todd: OK, how often do you have sushi?

Todd: OK. What is your favorite drink?

Todd: Do you have coke every day?

Keith: No because if I drink too much I gain weight.

Todd: Oh, yeah, yeah. I got the same problem. -- OK, how about desserts. What's your favorite dessert?

My favorite food. In Japan it's probably sushi.

'Probably' is another way to say most likely or almost certainly.  In the example, the speaker is 95% certain that his favorite food it sushi.  Notice the following:

I eat sushi at least two times a week.

If you drink Coca-Cola most of the time, more than any other soda, then you 'usually' drink Coca-Cola.  Something you usually do is your habit.  Notice the following:

If I drink too much Coca-Cola I gain weight.

To 'gain weight' is to increase how much you weigh, the pounds or kilos of your body.  For most people this means to get fat or fatter.  Notice the following:

'Dessert' is a sweet, like cake or ice cream, that you eat after a meal.  Notice the following:

Complete the sentences with the words below.
probably • at least • usually
gain weight • dessert