Lois talks about her favorite footballer. 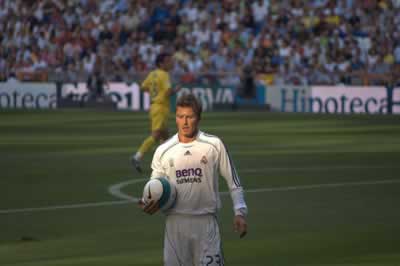 Todd: Lois, I noticed that you have a poster of David Beckham by your desk.

Lois: I do. I think that David Beckham is quite a handsome man. I also think that he is a very, very talented footballer, although his recent performance in Euro 2004 was maybe not quite what it should have been, he did miss two penalties but, I think in the past he has been a very good role model for people in England and a very good footballer.

Todd: So what is it about David Beckham that everyone thinks is handsome?

Lois: Everything about him is perfect. He's got a lovely body, great hair, when he has hair, and then when he doesn't have hair, he has a great shaped head. The only thing I don't really like about his body is his tattoos. He's just had a new tattoo on the back of his neck, and I think it is a cross with some Angels wings on it, and I don't think that is very nice, but apart from that I would say that he is perfect.

Todd: Uh-huh! Well, what color are his eyes?

Lois: I have not idea what color his eyes are! Um, no! I'm guessing brown but, I don't know.

Lois: How tall is he? Taller than me, but I don't know how tall he is either. No details, details. So do you think David Beckham is a better football player or a better model?

Lois: Whoa! Tricky! Um, possibly at the moment a better model, and maybe he should spend less time concentrating on that and more time on his football.

Todd: Does he have any children?

Lois: He has two children. I don't know how old they are. One is called Brooklyn and the other one is called Romeo, not really sure where they got their names from, but yeah, two young children.

David Beckham has been very good role model for people in England.

A 'role model' is a good example for how people should live or act. Notice the following:

In this case, 'penalty' is referring to penalty kicks, which are given when someone from the other team has committed a penalty against another player. Notice the following:

Apart from having a tattoo, I would say that David Beckham is perfect.

Here 'apart' is similar to 'other than.' The example says that if David Beckham didn't have a tattoo he would be perfect or the tattoo is the only thing that isn't perfect about him. Notice the following:

That was a tricky question.

A 'tricky' question is difficult to answer. Notice the following:

His wife just turned thirty a couple of months ago, and he is one year younger.

When we have a birthday our age chances and we 'turn' a different age. Notice the following:

Complete the sentences with the words below.
role model • penalty • apart
tricky • turned