Jose talks about some special islands in his country. 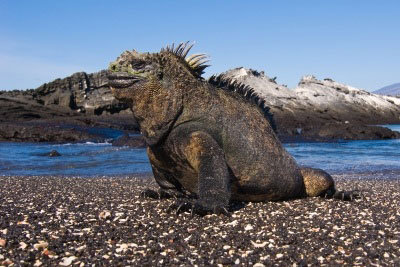 Todd: OK, Jose, you just said you went to the Galapagos Islands.

Todd: Can you talk about the Galapagos?

Jose: Yes, the Galapagos, as everybody knows is such a unique place and I went there and by chance I was in the same tour like with President Carter.

Jose: Well, it's so interesting because you know the guy was, I mean when went there, all of a sudden I had this strange people looking at me. I say, "What happened? What's wrong?" There were 8 bodyguards with the guy.

Jose: Yes! He was with his wife and his daughter and the child. Yeah it was interesting. You know that's just one anecdote but still, I'm , the Galapagos Islands, what I can tell you is that, it's a unique place, but you have to go there, sooner than later is better because I think the whole ecosystem will collapse.

Jose: Yeah! The situation is very complicated because lack of ---- of the government. The poor fisherman, and they don't have any kind of way to actually make a living by destroying the system. And all the money just goes to the big tourist companies that are taking tourists and you go to the capital, to Quito, but the people on the Islands, they don't have money, so they are, there's no control, for fishing, I mean, sharks and lobsters and tuna and so on, so everything is terrible. I was very very upset with the situation, and also you know, it's a kind of tourism for rich people and I was the only Ecuadorian in the group

Jose: Yes, that's not good. You know we were just servers and waitresses and waiters and Ecuadorians so, for me it was, I was 5 days there. You know it's very beautiful to see the animals and birds but me being an Ecuadorian I had a completely different point of view. I was very disappointed frankly.

The Galapagos, as everybody knows is such a unique place.

You can use the phrase 'as everybody knows' to show that something is common knowledge.

There were 8 bodyguards with the guy.

A 'bodyguard' is somebody who is paid to keep somebody else safe. Usually a bodyguard is very big and b and the person he protects is famous.

You know that's just one anecdote.

An 'anecdote' is a type of story that recalls a true and interesting event.

I think the whole ecosystem will collapse.

When something 'collapses' it falls down and becomes broken.

I was very very upset with the situation.

When you are 'upset' it means that you are sad or angry about something.

314 The Galapagos
Jose talks about some special islands in his country.
﻿
INT 4
Jose

313 Ecuadorian Food
Jose talks about some common dishes in his country.
﻿
INT 4
Eli

311 Aussie Sports
Aaron talks about the sports he played in Australia when he was younger.