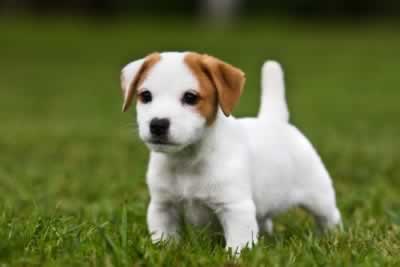 My first pet was bought for me when I was still a baby, so I think, I think I was, I think I was less than six weeks old when my granddad bought me a little terrier pup. So as far, as long as I can remember from being very very young, I could always remember this little dog who grew up with me really.

Her name was Lulu. I think my granddad named her. I don't really know why he called her Lulu but maybe after an English pop star, or maybe he liked the name, I'm not really sure, but he used to always call her "Lula" rather than Lulu, so I'm not too sure how the name came about, but anyway Lulu and I were about the same age really, so there wouldn't have been more than six weeks between us, and she was really cute, a very small dog, as most terriers are, I suppose, so yeah, quite small, and very small face, so she had really cute features and big brown eyes, from what I remember, so she was really sweet looking, and she was very friendly as well, and would be very happy and we would come and take her for walks or just play with her, and so yeah, we grew up together for the most part. I tried to spend as much time with her as I could cause she didn't actually live with me. She lived with her granddad still. He looked after her for me.

But yeah it was really sad. As she got older, obviously a dog doesn't live as long as we do, so about the time I was maybe, I don't know, twelve or thirteen I suppose, you could really see that poor Lulu was getting, getting much older and you know she had more difficulty in walking and she just looked like she had aged a lot really, so she finally passed away I think when I was about 16. So she lived to be quite old for a little dog like that, but it was really, really sad because we'd spent all that time together and the last few years, we'd been living in the same place and everything, yeah, so I was really, really sad when she passed away. Often times I think, with a pet, you know, when you've had a pet for so long, maybe you don't realize how really attached you are to that person, or to that pet, that animal, and so it really was a wrench when she died. It was very sad.

She had really cute features and big brown eyes.

In this case, 'feature' refers to a part of the face like the nose or mouth.

We grew up together for the most part.

When you 'grow up with someone' it means that you spend a lot of your childhood years with him.

He looked after her for me.

When you 'look after' someone it means that you take care of them and make sure that they are alright.

Maybe you don't realize how really attached you are to that person, or to that pet.

When you are 'attached' to a person or thing it means that you have a strong emotional connection with them.

It really was a wrench when she died. It was very sad.

When something is a 'wrench' it means that you are very saddened by it happening.

330 Growing up Overseas
Eli talks about being a kid while living abroad.
﻿
BEG 3
Marion

327 Sunday
Eli talks about a relaxing day with her friend.
﻿
INT 4
Todd