Broke in the Big Apple

Kevin talks about being very young, poor, and struggling to live in NYC. 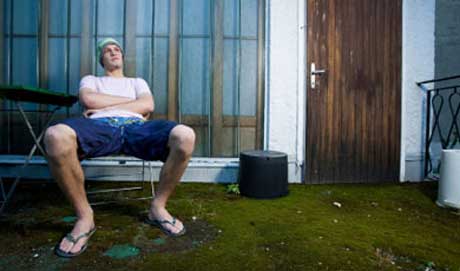 Todd: So Kevin, I thought we would talk about money today, and you have many interesting stories about being broke.

Kevin: Yes. I have been broke a number of times. Anything in particular that you would like to hear? I've got quite a bunch.

Todd: So tell me when was the first time you were really broke?

Kevin: The first time I was really broke was, I was 19, and I moved to New York City. I followed a girl that I met in Glacier National Park, I was working out there as a singing waiter.

Went out to New York, followed her, and I ended up living in an apartment with three other people and the share of my rent was $500 a month. Now that was 20 years ago, and $500 a month 20 years ago to a 19 year old kid with no education, no experience... that was a lot.

So I worked three jobs. I worked from 7 a.m. to 10 a.m. at the George Washington Street Bus Terminal and subway station handing out flyers, American Express Moneygram flyers, then I would take the subway to Midtown, to FAO Schwartz, you know the big toy store...

Kevin: ...where he dances on the piano. Yeah, and I was... I would wrap presents there. And then I would work there from 11 to 4, and then I would take the subway back down to The Village where I was living, and I would work from 6 p.m. to 1 a.m. as a waiter and bus boy.

Todd: One slice of pizza and a pack of cigarettes.

Kevin: Well, and a Hostess Fruit Pie lunch. But one time, during lunchtime at FAO Schwartz, I went down to the vending machine and I got my Hostess Fruit Pie and I took a bite in it and it was hollow. There was no fruit in it and I really had a small panic attack, and I called the toll free number on it, and I complained, "You just don't understand how much of my daily nutritional intake that pie represented", and all he did was apologize and I was hoping they would send me a case of pies, but they didn't.

Todd: No such luck.

Kevin: That's right. When I went home, I was probably about 30 pounds lighter than before I left. And I was really poor. So that's the first time I was really broke.

You have many stories about being broke.

When you are broke, you have no money. You are very poor. Notice the following examples:

I've got quite a bunch.

A bunch means many. We often use bunch for things that are grouped together like a bunch of bananas. Here are some sample sentences.

ended up (to end up)

I ended up living in an apartment

When you end up somewhere, you eventually stop at some place, often with no planning. This can refer to a place or action. Notice the following sentences:

I was handing out flyers at the subway station.

A flyer is a piece of paper with information on it, usually as an advertisement. When you hand out flyers, you give them to people, often without them asking for it. You often see people handing out flyers in public places like subway stations and so on. Notice the following:

I took the subway back down to the Village.

The Village is a part of New York. The Village is short for Greenwich Village. It is one of many areas in Manhattan, the main island of New York City. Other areas include Chelsea, SoHo, Chinatown, and Little Italy. The famous TV show Friends is set in the Village.

The word brutal means to be very hard and uncomfortable. When something is brutal it is not fun or enjoyable. We often use the word to show sympathy when someone talks about a bad experience. 'Harsh' is similar in meaning. Notice the following.

Ann: How was your test?
Joe: Brutal! I am sure I failed.

Tim: My boss told me I have to work Saturday.
Moe: That's brutal. Now you will miss the party.

I was fired for talking to customers. Truth is, the customers wanted to talk to me.

The phrase 'truth is' is used to show a contradiction or surprise. Notice the following sample sentences.

I had a small panic attack.

I called the toll free number.

You just don't understand how much of my daily nutritional intake that pie represented.

349 Broke in the Big Apple
Kevin talks about being very young and poor in New York.
INT 4
CleAnn