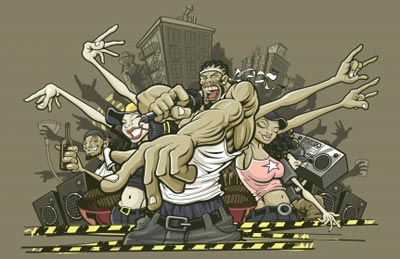 Todd: Right. Actually me too. I like Hip-hop when I run. Do you think that Hip-hop music negatively influences people? Do you think it should be censored or should be controlled in anyway?

Jeanie: I feel like it has a tendency to negatively influence people, mostly because the people it influences aren't very strong or very confident in themselves. They feel like that in order to be something they have to
do what the people who made money are doing. For them it looks like the easy way out. For example if you're stuck in poverty and you look at the TV and you look at people who are exactly like you, who are stuck in poverty and suddenly all they did was, they did gang banging and stuff like that, and then they rapped about it, and they got money, it's like "Wow", why don't I do that. And I have to build up this hard image so that I can make money. You know, get to the top.

Todd: So you're saying part of the problem is for people to aspire to be a popular Hip-hop artist, they actually have to do some type of criminal activity first?

Jeanie: Yeah, it's the image that you get because in all the music they're rapping about what they did. You know, and if you ask somebody later on, "oh did you really do that?" and they say, "Oh, no. It was just for a song" then you know, people are all "Oh, you're not cool." You know, you want to rap about something that you've actually been through. It's a really, you know, "Yeah I did this. I'm really hard." You know. Otherwise you're just, you're just speaking.

Todd: Well, do you think that the music should be censored in anyway?

Jeanie: I think to a point it should be, just as far as kids, children don't need to hear this stuff all the time and you know, unfortunately what you get, even if they censor it in the stores and say "Oh, it's, this is not for kids", or you know, stuff like that, you're going to get in these areas, people driving down the street in their big expensive cars blasting this kind of music, so the kids are going to hear it anyway, so I don't feel that there is a real way to censor it

Todd: Yeah, I guess this problem is always going to be around.

Do you think that Hip-hop music negatively influences people?

If you have an effect on someone or something, you 'influence' it.  You cause a change.  Notice the following:

All they did was, they did gang banging and stuff like that.

'Gang banging' refers to stereotypical gang activities, such as selling drugs and getting in fights. Notice the following:

I have to build up this hard image so that I can make money.

Someone who doesn't show fear or care about the law has a 'hard image.'  They give the public the idea that they don't care about anything or anybody.  Notice the following:

For people to aspire to be a popular Hip-hop artist, they actually have to do some type of criminal activity first?

If you dream of being a Hip-Hop artist, then you 'aspire' to have that career.  An aspiration is a dream or ambition.  Notice the following:

Well, do you think that the music should be censored in any way?

If a movie or a CD is censored, the offensive parts such as bad language or violence are removed.  CDs with bad language are sometimes censored for children.  Notice the following:

Complete the sentences with the words below.
influence • banging • image
aspires • censored