Nitya talks about her hometown of Varanasi. 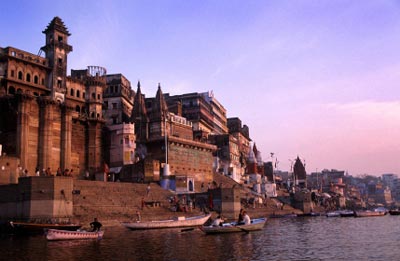 Todd:Hello, Nitya. (Hi) How are you today? (Great) Now, Nitya, can you talk a little a bit about where are you from?

Nitya: OK, I'm from India, the Northern part of India, and from a very small city, but the oldest one in India. It's considered a very religious and holy city. It has a lot of temples and mosque and different things.

Todd: Wow, that's cool. What is your city's name?

Todd: And how do you spell Varanasi in English?

Todd: That's a cool name. Varanasi. And it's the oldest city...

Nitya: The oldest city in India.

Todd: Now you said it's a holy city. What kind of holy city? For what religion?

Nitya: Because that's the greatest part, that it has all the religions, buildings there are like mosques for muslims and it has temples and it has (gan) temples, different kind of, and buddhist temples. (Wow) It has a place where Buddha gave his first lecture (seriously) in the world, yeah, it's called Saranat. You ask any buddhist people and they know about it.

Nitya: Yeah, Buddha gave his first lecture sitting under a tree, and the tree's been preserved there for ages.

Todd: Oh, what religion are you?

Todd: Hindu, OK, and there's hindu temples naturally. (Yeah) OK, so what is the difference between say, a buddhist temple, in architecture, and a hindu temple, do they look the same?

Nitya: Not exactly because Buddhist temple, OK, it has Buddha basically, right, (right) Hindu temples have like 33,000 gods so you go in different temples and you find different, like different sculptures sitting there so it's...

Nitya: But, come on, it's basically just God.

Nitya: You just see them in different forms. That's it so.

Todd: Oh, OK, well of the different forms, which is a more popular one? Which is a very common one?

Nitya: I think Shiva because they say he's the, he created the earth so

Todd: Wow, interesting. OK, and is your town, is it big, is it small, is it medium-sized?

Nitya: I think, it's like medium, not very big, not very small.

Todd: OK, so sounds like a good place. Do you see yourself living there forever when you get older?

It's considered a very religious and holy city.

A 'holy' city is place that is important for religious reasons; it is considered sacred.  Notice the following:

Buddha gave his first lecture sitting under a tree.

A 'lecture' is a speech that is given to teach other people what you know.  University professors give lectures.  Notice the following:

The tree's been preserved there for ages.

If the tree has been there for a long time, but we don't want to say exactly how long, we can say that it has been there 'for ages.'  Notice the following:

You just see them in different forms.

The shape, appearance or way of use of something is its form.  For example we use milk in many forms: butter, milk, cheese, cream, etc.  Notice the following:

I think Shiva because they say he created the earth.

To 'create' something is to make it.  We usually use create to talk about a new idea made into something, like an invention.  Notice the following: