Darren talks about fishing in his local area and what's good about it. 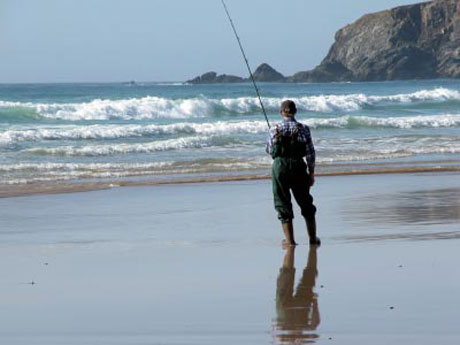 Dai: OK and what can you do down there for fun.

Darren: Well, most of what I do is, in my spare time, is in some way connected to sport. The last five or six years I've started fishing again.

Darren: Yeah, I know it’s got a bit of a dull image but I fished a lot when I was younger. I gave it up for about twenty years and someone got me back into it about six years ago and I really do enjoy it again.

Darren: Well, it’s quite unusual. We don’t fish as most people imagine where you sit by a riverbank and don’t move. The fishing I do is at night time. The fish come in a lot closer and I fish off the beach. Because they come in closer at night time, it’s the best time to go. So it’s quite exhilarating just being out there. You haven’t got to catch fish to enjoy it.

Darren: It’s great being under the stars and hearing the waves crash in. It’s just a beautiful place to be even if you don’t catch a fish...which is good news really because I don’t catch fish very often.

Darren: Well I was amazed when I re-started how cheap it was. It was probably cheaper twenty years after I finished than it was when I packed it [in]. For about sixty pound you could go down to the local tackle shop and they’re very, very helpful. They’d kit you out.

Darren: And you could start, but what I would advise is that you would find someone who did know what they were doing, just to show you the ropes really. But I was amazed how quickly I got back into it after so long away.

Dai: And what kind of fish are you catching?

Darren: There’s loads of fish around the Pembrookshire coast. You know, absolutely loads of varieties, but we do target a fish called bass which I know there’s a lot of varieties around the world, but it’s a great eating fish.

Dai: Oh, so you eat the fish you catch normally?

Darren: But the bass is a beautiful eating fish, quite expensive to buy in a restaurant so it’s a lot better to catch them yourself.

I gave it up for about twenty years.

When we give something up that means we stop doing it.  Notice the following:

A friend got me back into fishing about six years ago.

To get back into something means to start doing it again.  Notice the following:

What draws you into fishing?

What draws us into something is what gets us interested.  Notice the following:

It’s quite exhilarating just being out there.

I will show you the ropes.

When we show someone the ropes that means we teach them how to do a job or task.  Notice the following:

925 The Fisherman
Darren talks about fishing in his local area.
﻿
INT 5
Sharron Dai

921 Deforestation
David talks about how deforestation and its issues.

Complete the sentences with the words below.
give it up • back into • drawn
exhilarating • the ropes