Melissa shares what she thinks makes a good date. 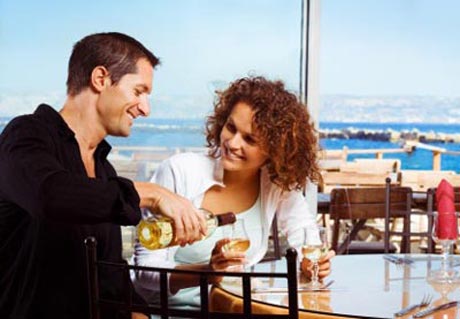 Doron: What's your idea of a good date? Where would you want to be taken on a date?

Melissa: My idea of a good date is something that consists of doing a lot of different things. Just a full interesting night, so I think there doesn't have to be any certain place but maybe a few places, so I like nature. I think a nice date would be maybe to go out hiking or bicycle riding or something like that and then, after a good day of working out, maybe going out to dinner, or to a comedy club. I like going to see comedians.

Doron: I guess that's a good way to find out if you fit well with the guy you are dating, cause if you are laughing at the same things you probably have the same sense of humor and you're gonna get on well together.

Melissa: Yeah. It could be awkward too. A lot of American comedy clubs often tell dirty jokes and things like that so it could get awkward. Sometimes the comedians pick on people in the crowd, so they might embarrass me or do something like that, but even just going out to dinner and then going out afterward to the oceanside or something like that.

Doron: What about a bad date? What would be a bad date for you? What could a guy do to really turn you off?

Melissa: I really ... well, he could make some kind of bigot comment or racist comment, or something like that: prejudice comment, and I would be really turned off but I think his whole attitude towards other people is really important to me, so the way he treats people around me, the waitresses, the waiters, the staff. Sometimes I've been around guys who treat the staff at a restaurant really bad.

Melissa: I don't like that at all, so that could be a turn off.

Doron: Have you ever worked in a restaurant or a cafe?

Melissa: Yes, I have. I started working part-time when I was fifteen at a sandwich shop, and we made hoagies and other kinds of sandwiches.

Doron: You made what?

Melissa: It's like a sub-sandwich. It's a kind of long sandwich and it's really good. You can choose what kind of slice meat of cheese you want on it ... vegetables.

Doron: I'm getting hungry now. OK, so you worked in a sandwich shop.

Melissa: Yeah. And I worked in a pizza shop. I worked in lots of different part-time jobs but, I was never a waiter or waitress who would go up to a table. It was always called line serving, so you would be behind a counter taking orders and making food.

Doron: But you dealt with customers?

Doron: Respect for other people.

Melissa: I like to date a guy who's respectful of other people definitely.

We have the same sense of humor.

Someone with a great sense humor likes to joke and laugh: Note the following:

What could a guy do to really turn you off?

When something or someone turns us off, it means we form a negative impression.  Note the following:

People who deal with customers in the service industry are generally more polite.

To deal with someone or something means we tolerate a negative situation or contact.  Note the following:

A tolerant person does not get angry with behaviour or opinions that are different from his or her own.  Note the following:

I like to date a guy who's respectful of other people.

Someone who is respectful is polite to others.  Note the following:

942 Dog Will Travel
Greg talks about his dog and his travels.
﻿
INT 4
Greg | Todd

941 Dancer the Dog
Greg shares what makes his dog special.

Complete the sentences with the words below.
sense of humor • turn off • dealt with
tolerant of • respectful of