Adelina talks about the regions of her country and what part she likes the best. 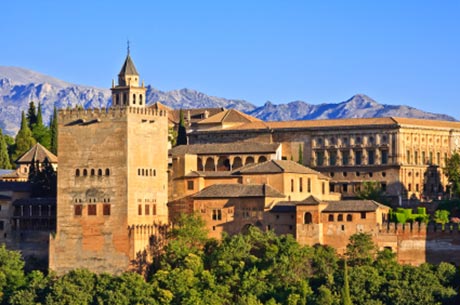 Chris: Hi, Adelina. Tell me again, you're from Spain. Where exactly from Spain are you?

Ade: I come from the south, a region called Andalucia.

Chris: As we say, Andalusia?

Chris: Where is this, that's the south and then if you say south, everybody would think holiday, beach, staying up late, partying even.

Ade: Yeah, they are right. We know how to enjoy life. And actually it's a very like ... I don't know, but people go to island for summer holidays, but if they really want to know what the real Spain is, they should go to the south.

Chris: Of course, because since you're from the south, that's why you say that.

Ade: No, it's not because of that, it's because there is where the flamenco comes from, the bullfighting, and I don't know, we have more Spanish customs there.

Chris: Okay. Now, so if you would have to say to somebody, if you have to tell a tourist, instead of always going to the same cities like Mallorca, Benidorm, Tenerife, if you would say three really good places in your country, where would you send someone?

Ade: Well it depends what they like, if they are people who enjoy nature I will say ... I don't know, go to Granada and Sierra of Granada, name of Alpujarras, there you can find this little village, that they are so authentic. But Granada city also, they have a very nice castle name La Alhambra, is very, very beautiful. And you also have Sierra Nevada if you enjoy skiing and snowboarding. But if you are a city person I will recommend Barcelona of course, very nice in culture, in art, in shopping, in clubbing, is very, very nice city.

Chris: Well I hope you're not going to say football now.

Chris: Okay, so Granada of course in winter must be beautiful for skiing holidays and everything, but in summer it must be really too hot there.

Ade: Yes, it is, it's more a city to go and enjoy in winter time.

Chris: So you tell people to stay away from the beaches and visit the inside of the country?

Ade: Yeah, you can also go to the beaches. But I mean like the...

Ade: I don't know, Mallorca is very nice, Minorca, Ibiza, all the islands are actually, but the problem is that this is ... these islands are so focused on tourism that they actually lose the real taste of Spain. It's too focused on tourism, because for example, if you go to any place on Mallorca you will find all the restaurants with all the menus writing down in German, in English, in all the languages but Spanish. In my point of view, I don't think it's nice because you go to a place where it's sunny but you find actually the same food and the same language and the same lifestyle that you find in your country or for eating. I don't think it's nice to have a holidays like this.

Chris: So you mean that when you go somewhere you really want to know that you're in that place, so for example, if you're in China you want to see the menu in Chinese and that's it?

Everybody would think holiday, beach, staying up late, partying even.

When you stay up late, you go to bed at a late time. Notice the following:

They really want to know what the real Spain is.

Here, real means the normal Spain, and not the image most people have of it through media and TV. Notice the following:

They are so authentic.

It's too focused on tourism.

When you focus on something, you give it all your attention. Notice the following:

In my point of view

In my point of view, I don't think it's nice.

'In my point of view' just means 'in my opinion.' This is a common phrase to say before you say your opinion. Notice the following:

stay up • focus on • real
authentic • point of view