Abiedemi talks with Todd about the different languages that are spoken in her country. 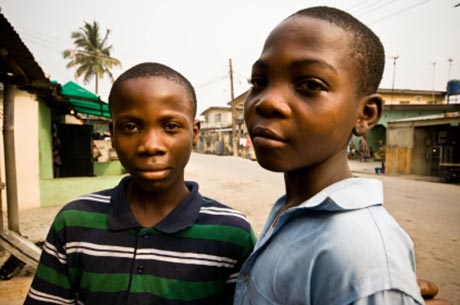 Todd: So, Abidemi, we've been talking about your country, Nigeria. Now, you've mentioned that there's different langauges in different regions.

Todd: Now, are they similar or are they completely different?

Abidemi: I believe they're completely different. Nigeria has over 250 languages.

Abidemi: Yes. Yes. So that's not even counting the dialects, when you start breaking them down into dialects, I believe there are over 500, maybe even thousands of dialects, because Nigeria was a British colony, so these were distinct communities and groups of people before the British came in. So that's why, one of the reasons we have so many languages. However, we have four official languages, of course English, we need that to unite everybody. And in schools people learn English. We all have Yoruba in the southwestern part of Nigeria, which is my native language. We have Igbo in the southeastern part and Hausa in the northern part of Nigeria, yes.

Todd: Wow! Can you talk a little bit about each language? Now, you said your language is Yoruba?

Abidemi: Yes, that's correct, Yoruba is a tonal language like Chinese or Cantonese, unlike Cantonese, we have three tones and not four, so ba, ba, ba, I don't know if you can tell the difference between those three words but they are different, three different words. Igbo, I'm not so sure, but it's a completely different language, if somebody's speaking it I would not be able to understand.

Todd: And what region is that in?

Abidemi: It's in the southeastern part of Nigeria. And then finally Hausa, it's more ... it's closer to Arabic I believe and a lot of Hausas are Muslims, so I think there's that relationship between those two languages.

Todd: So they sound completely different from each other?

Abidemi: Completely different, and because we have so many languages sometimes you would have a neighboring community but people can't understand each other unless they speak in English because their languages are nothing alike, yeah.

Todd: So how common is it to find somebody who speaks all three languages, the three major languages?

Abidemi: There are some people who do. There are some people who do, especially businessmen, a lot of Yorubas and Igbos are very business oriented, but traditionally men, they will travel to different parts of Nigeria and some other countries in West Africa to do trade. So for those people it was essential to learn languages, so those people can. Nowadays most people just speak two, you speak English and your native language. So maybe it's becoming rarer and rarer to find people who speak all three languages.

Todd: So are these languages all taught in the school system?

Abidemi: For the most part no, which I think it's very unfortunate, I think it's something we should be very proud of. But now the emphasis is on English. So a lot of parents want their children to learn English in school, the top schools are mainly English and the onus is on the families to teach their children their native languages at home or maybe if you live in a neighborhood, for example if you're Yoruba like I am, if you live in a neighborhood where there are other Igbos, of course you would have Yoruba at home and Igbo being spoken to you by your friends and you might be able to pick it up that way, but generally no. So for me, when I was growing up I went to English speaking schools so I learned English at school, I never learned my native language at school at all. But at home I tried by myself, I studied my language by myself, so that's how I learned to speak.

Todd: So do you think you'll pass on the language to your children some day?

Todd: Oh, I agree, one's native language is always the most important.

Abidemi: Yes, these are the three major ethnicities - ethnic groups in Nigeria, yes.

That's not even counting the dialects

This phrase meanings 'not including.' Notice the following:

You start breaking them down into dialects.

When you break something down, you make it easier to understand. Notice the following:

An onus is one's own resposibility. Notice the following:

Do you think you'll pass on the language to your children some day?

When you pass something on, you keep it active from one generation to another. Notice the following:

part of my identy

Yoruba is part of my identity.

When something is part of your identity, it is something people associate with you. Notice the following: