Where to work in Asia

Dan, and American ex-pat, talks about nice places to work from or run a company in Asia.

Todd: So, I'm here with Dan, and Dan lives in Bali, Indonesia where he runs his business operations. And we’re going to talk about good cities to do business.

So Dan what are your favorite cities or cities that do you think would be a good place to start up an international business? 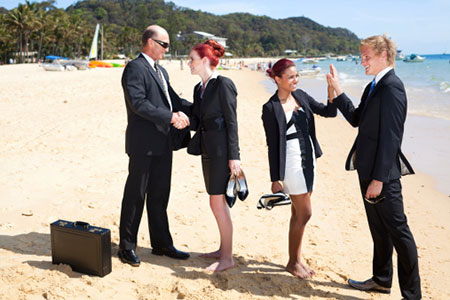 If you’re looking for lifestyle like a great lifestyle, maybe you’re not hiring so much or doing financial things but it’s just on your laptop, say, Bangkok is a great place. Some of the best food in the entire world, you’ve got great night life, and you can travel anywhere from Bangkok.

Bali obviously is a great place, if you’re not such a city person and you like a more relax environment but it’s still very developed. I mean, you can eat a hundred different nationality of food, walk down the street and you can get food from all around the world, whereas if you want something a little bit more of an adventure and secluded, sort of off the beaten track, you could select Nha Trang in South Central Vietnam.

Todd: Now, you have connections in China, could you recommend any places in China?

Dan: Well, unfortunately for me in China is that a lot of my travel there has been super business focused. And I'm always going to the place where there’s the factory or the bank or the connection. And so I haven’t really gotten a great chance to explore places that you might go for lifestyle. But off the top of my head, there’s two places that stick out. One is Shanghai.

And really to me—you know, I’ve been to a lot of big cities, but Shanghai is a whole another level of big. It’s like the movie Blade Runner mixed with the movie The Matrix. I mean, it is so futuristic and I just—it really blew me away to be in the city. And it also has hints of Europe. I mean, Shanghai is famous for being famous in the 1920s and '30s with ex-patriots coming there, and it’s very international. And it really does have sort of a charm that a lot of places in China lack because cities in China are so new; a 10 million person city just sort of pops up overnight.

Another place that sticks out for me is Shaman, and that’s close to Taipei and it’s one of the nicer big cities in China. There’s a lot of more nature-oriented green park stuff like that. So those would be the two places, but especially Shanghai, I feel like I could live there for a few years.

When you hire someone, you give them a job. Notice the following:

The house is very secluded.

A secluded place does not have many visitors. Notice the following:

off the beaten track

The town is off the beaten track.

Off the top of my head

Off the top of my head, there’s two places

We say 'off the top of my head' when we say ideas without much thought. Notice the following:

There’s two places that stick out.

Here stick out means comes to mind. Notice the following:

A big city just sort of pops up overnight.

The phrase 'pop up' means to appear, and 'overnight' means very rapidly. Notice the following:

hire • secluded • beaten track
off the top • sticks out • pop up

#1325 Slow Travel
Travelling vs staying in one place.
INT 4
Abidemi

#1324
Would you rather work for a large or small company?

#1322 The Recovery
An accident that ruined a special day.
INT 6
Aimee / Paul