Tim discusses running both as a sport and for recreation. 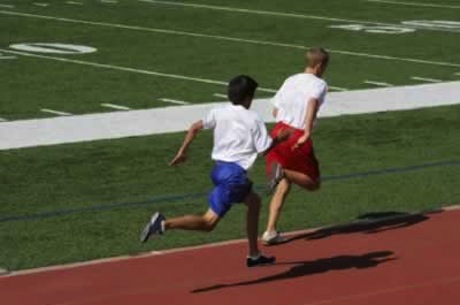 Todd: Now, we've been running the last couple of nights.

Todd: And, you're much faster than me. You're a fast runner. How often do you run?

Tim: Well, now I only run about four days a week but when I was younger everyday.

Todd: Oh, really? Wow! Did you run in high school or college?

Tim: I ran.. I started when I was six years old.

Tim: And I started running and I ran all the way through the university.

Todd: OK. So what events did you do?

Tim: Yeah. I did that in high school actually. I wasn't so fast in the university.

Todd: Now I don't feel so bad when you run so much faster than me.

Tim: I've been slowing down. I've been drinking beer so I don't run so fast anymore.

We've been running the last couple of nights.

Specifically a 'couple of' means two, but we usually use it in a more general sense to mean two or three.  We use this phrase when we aren't giving exact information.  Notice the following:

[I started running when I was six years old.] No kidding!

'No kidding' is used as a response to a statement we think is unbelievable.  Notice the following:

I ran all through university.

If you did something 'all through university' it means that you did it the entire time you were there, not constantly, but consistently.  Notice the following:

What events did you do?

When we are talking about 'events' like this it is a competition that you do in the sport 'track and field'.  Each event is a different distance or physical test.  Notice the following:

I've been slowing down, because I've been drinking beer.

If you 'slow down' it means you don't go as fast as you did before.  Notice the following:

couple of • no kidding • all through
events • slow down

39 The Guesthouse
Daisuke talks about his living arrangement.
﻿
INT 5
Theo

38 The Beef with Beef
Theo is not happy about his beef bowl.
﻿
INT 4
Clare