James is in a band. He talks about it and the kind of music he plays. 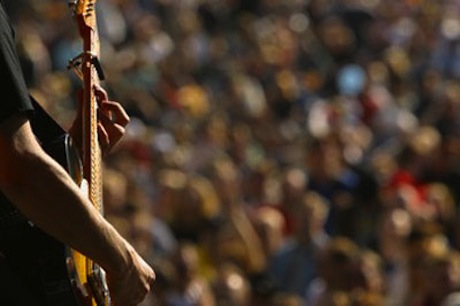 Todd: OK, tell us about your band.

James: I play in a Swedish Bubblegum Punk Band.

Todd: Swedish Bubblegum Punk Band. What exactly is that?

James: I don't know, but that's what it says on the CD.

Todd: OK. What do you play in your band?

James: I play base guitar.

Todd: OK. How long have you been playing the guitar?

James: I've been playing the guitar for about 12 or 13 years.

Todd: Oh, really! OK. Nice. Do you play any other instruments?

James: I play a little guitar and a little drums.

Todd: Since you're in a band do you meet lots of women?

Todd: Really! You're a rock star.

Todd: Nice. Nice. Do you tour or do you just play where you live?

Todd: OK. What the best thing about being a musician, in the band?

James: It's really good for relaxing and having fun.

Todd: Is it your full-time job?


What exactly is that band?


We use the word 'exactly' when we want specific details about something, not general answers. Notice the following:


If you 'play' an instrument you know how to use it make music and songs.  Notice the following:


You're a rock star!


A 'rock star' is a famous musician who plays rock music.  Notice the following:


Do you tour or do you just play in the local clubs?


If you 'tour' you go from one place to another doing shows.  A 'local club' is a small bar or music place for bands that are just starting or not nationally popular. Notice the following:


It's not my full-time job; it's just my hobby.


Your 'full-time' job is what you do to make money.  Full-time means that you do it about 40 hours a week.  Notice the following:

72 Driving
Getting a driver's license in the U.S.
﻿
BEG 3
Marika