Ashley talks about a special anniversary. 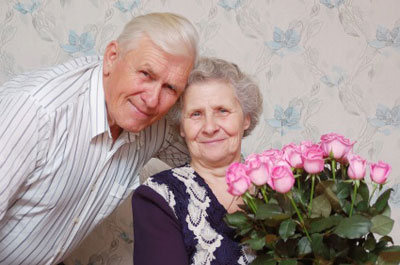 Jessica: So Ashley, what are you going to do this summer?

Ashley: I am really excited. This summer I'm going to my Grandparents' 50th wedding anniversary. We are having a huge party and I'm really excited. My entire family is going to be there. they're renting a house in Lake Tahoe, which is where my mom grew up, and where my grandparents spent the majority of their life together. We'll be there for a week, on the lake, boating, jet skiing, that whole thing, and then this Saturday we're having a party with people I've never even met. Everyone's gonna be there. I'm really excited.

Jessica: Oh, that's wonderful. So how many of your family member will be there?

Ashley: Oh, gosh, I have no idea. Every time I speak to my mother I hear somebody knew who has been invited and somebody else is going to be there. I'm really excited. It's going to be a lot of fun. My grandparents are crazy. They actually got engaged a month after they met, and February, the shortest month of the year. My grandfather told my grandmother he loved her a week after they met, and then he proposed and then he was in service so he went away until August. They didn't see each other until they got married. Yeah, my grandmother says, "If any of you kids do this, we'll kill you. I can't believe 50 years later they're still together.

This summer, I'm going to my grandparents' 50th wedding anniversary.

A 'wedding anniversary' is like the birthday of your wedding.  You celebrate the date that you got married every year. Notice the following:

Lake Tahoe is where my grandparents spent the majority of their life together.

'Majority' is similar to most.  In the case of the example, my grandparents lived most of their life together at Lake Tahoe.  Notice the following:

Every time I speak to my mom, I hear somebody else is going to be there.

In this case, 'somebody else' can be replaced with 'an additional person' Notice the following:

My grandfather proposed and they got engaged in February.

When a man 'proposes' to a woman he asks her to marry him.  If she says yes then they are 'engaged.' Notice the following:

My grandfather was in service so he went away until August.

In a person is in the military we say that he is 'in service.' Notice the following:

anniversary • majority of • somebody else
engaged • proposed • in service

215 The Wedding - His Story
John talks about the day he got married.
﻿
BEG 3
Alex

214 Band Trip
Alex talks about a trip he took with his band in college.
﻿
INT 4
Steve

212 The Anniversary
Ashley talks about a special anniversary.
﻿
INT 4
Steve

211 Onsens
Steve talks about his love of onsens, or Japanese hot springs.