Norman talks about a class that gave him trouble as a teacher. 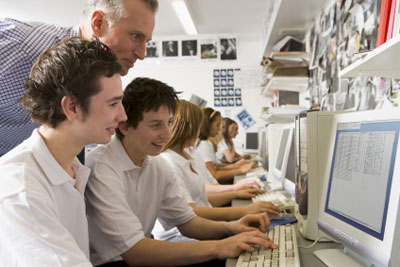 Todd: Norm, you said that you used to teach computers!

Norman: Yes! I did at the elementary school back in Canada.

Norman: Actually, I initiated a computer project. We were placed behind the gym, in the storage area. At the time we didn't have the state of the art computer labs. It was just starting in the eighties, it was like pioneering in the school.

Todd: Oh, OK, well was it pretty easy to do?

Norman: Ah, it was kind of difficult because being in the gym, when the students would play basketball, the basketballs would bounce against the, it was just a wooden door, and the students wouldn't be able to hear me and it was kind of difficult as well to see the whole class as there was a wall that was separating my class, so I could see only half the class at a time.

Todd: You could only see half the class and you were teaching computers!

Norman: That's right! That's right, and so I would have two boards. One board at one end where I would teach the lesson to half the half the class, and then I'd walk over to the other end and do the same thing.

Todd: Oh, man that must have been a nightmare!

Norman: It was. It was, because I could never see what the other half was doing in my absence.

Todd: So did they ever doing anything bad to get in trouble!

Norman: Oh, yes, they were, they were. I can remember one instance when one student calls me over and he said, "Mr. Groussier, I have water in my external drive. At the time you used floppy disks and put them in the external drive. I said, "Water, oh no. There's no water!" So, I went over and I tried to insert the floppy disk, and it just wouldn't, there seemed to be something blocking the floppy disk from going in so I peak in and sure enough I see that it's stuffed with watermelon. So, hence, that external disk drive was useless from then on.

Todd: Wow, so how many years did you teach computers.

Norman: Well, in that particular lab only one year and after that we moved to a full-fledged lab and I taught computer to my own class which meant once a week, a formal computer teaching and then we would go to the lab for other reasons like doing some research projects.

Todd: Oh, Wow. Did you like it, teaching computers?

Norman: In the computer lab, yes, because it was really well equipped with apple computers and printers and we had so many programs that students could use and do some really nice projects or nice cover pages, we had color printers and very efficient printers as well, so it was wonderful.

It started when I initiated a computer project.

To 'initiate' something is to begin it. Notice the following:

Back then, we didn't have state-of-the-art computer labs.

If something is 'state-of-the-art' it means it is the most modern technology. Notice the following:

Teaching that class must have been a nightmare!

We use 'nightmare' in this sense to say that something sounds like a really bad situation. Notice the following:

I peeked in, and sure enough, there was watermelon inside.

After a year, we moved to a full-fledged lab.

A 'full-fledged' lab is one that is fully developed and has all of the necessary equipment. Notice the following:

initiated • of the art • nightmare
sure enough • full-fledged