Norman talks about a time he got lost in the woods. 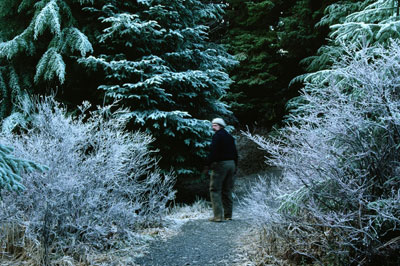 Todd: So Norm, you said you have a pretty good story about going hiking and you almost got dehydrated.

Norm: Yes, it was, we were on our first day of, it was a six day hiking trip in a national park in Quebec, Canada, and I had not done the itinerary, but my friend had figured out that the first day we could walk 19 1/2 kilometers in the wilderness.

I mentioned that, I would have gone for 10 kilometers, do the first stop at the first campsite, but I didn't realize that he was more optimistic than I was, and so we started out on our first day and very heavy backpack, about 24 kilograms, and very hot day, 30, 32 degrees with hot humid day, and the first day was up and down, up and down, all the time, so at the end of the day, mistake number 1 was we passed sort of a small river and we didn't refill our bottles because we thought we were almost at our destination, the lake, but it was further than we thought so we ran out of water and darkness set upon us and we were up on a huge rock, and what had happened was, we were at the lookout and because we were tired, we were supposed to go left. We went right, so we backtracked, and I, after about five minutes, I mentioned to my other three colleagues I said, we've been here before, I said we're backtracking.

All three of then said, how can you tell, I said, I remember these particular trees. I said I noticed them all, and they "There are thousands of trees here. You must be mistaken. I said well I'm sure. So they say "No, no. no. It can't be. We're going in the right direction and so we back tracked, and by this time we never got to our camp ground and so we had to stop and we had no water. We hadn't had any water for about two hours, three hours, and so they were kinda, didn't know what to do, but I saw that there was a swamp at the bottom, and I said, "there's water!" Well!, so two of our colleagues stayed up with the tents and I went went down with a friend of mine and it took up an hour just to go down to the swamp, because it was not a path, just there we boulders and big rocks, and we had to go around many obstacles, and then by the time we got to the swamp, it was really dark, so I tied the bottle to a rope and I just threw it in the middle of the swamp to try and get as least dirt as possible and then use my shirt to filter it into a pot we had brought with us, to the swamp a pot and a heater, so that we could boil the water. We would ... we were very dehydrated, if we hadn't drank at that time, we wouldn't have been able to go back up, so I said we need to replenish our bodies with water, then we'll come back up.

So by this time is was pitch dark and my friend had this little hand flashlight that is, didn't last 45 minutes, but luckily I had my headlamp and I had just replaced my batteries and that can work 24 hours non stop so we used my single head lamp to go back up but it took up two hours to get back up so we had gone down about 8:30. We left the camp and it was close to midnight by the time we got up. Yeah, total darkness, and because we were on, just on, we could set up tent was a rock, that was like a round, rounded rock, and they set up their big tent, but I couldn't sleep in the tent, because it was just no room, so I just put my sleeping bag on the rock and just slept the whole evening. Luckily for me it didn't rain and and I managed to spend, had a fairly good night sleep.

So then the next day you just hiked back to your home? No the next day we had, I had brought some re-hydrating salts and that night when we came back with all the water I told everyone that we should put this in the water and then the next morning we felt much better, but then, this time we had light, proper light, sunlight and we looked at the topological map and then we figured out that where we had gone wrong. We were just barely forty minutes away from where we should have been before we made the wrong turn. We were actually very close, but when we backtracked that was our mistake, so 45 minutes later we were at the next lake where there were facilities for setting up our tents, and we were so exhausted that we spent the whole day sleeping before continuing on our trip.

Tell us about your hiking trip where you almost got dehydrated.

When you are 'dehydrated' you don't have enough water in your system to be healthy. Many times you are thirsty and get a really bad headache when you just begin to become dehydrated. Notice the following:

itinerary or figured out

I had not done the itinerary, but my friend figured out how much we could walk.

An 'itinerary' is a detailed plan which shows what will happen each day or at a specific time.  In this case, 'figure out' is very similar to calculate. Notice the following:

I didn't realize that my friend was more optimistic than I was.

An 'optimistic' person always expects the best from every situation.  In this case 'optimistic' is very similar to confident or hopeful.Notice the following:

I knew we were backtracking, so I mentioned that to my colleagues.

When you 'backtrack' go back through something you have already passed through.  This can be literally walking back through a place, or discussing a topic that has already been discussed.  Notice the following:

It was pitch dark by the time we had to climb up.

If a place is 'pitch dark' it is completely black without any kind of light. Notice the following: