Jeff talks about trying to make a film. 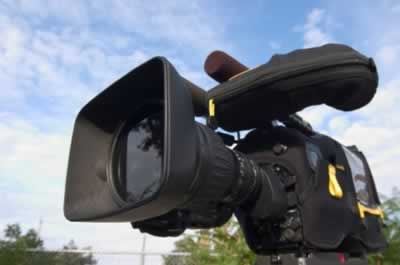 Jeff: My brothers and I just did a really fun and difficult journey across India in a rickshaw. It's.. a rickshaw is a three-wheeled, a little three-wheeled vehicle. It's a cross between a car and a motorcycle. It has no doors and it has no trunk to put luggage in and it has a little.. it has a little steering bar like a motorcycle and it doesn't go very fast and we drove this all the way across the country from Bangladesh to Pakistan and it was a crazy journey. It was crazy, very dangerous and full of surprises and very hard of your body and your mind and I did this with my two brothers in a rickshaw. My brothers and I filmed the entire journey in the rickshaw with a professional video camera. One of my dreams in life is to make a documentary for TV and we decided to make a documentary of our trip across India and it was very difficult. We thought it would be easy but when we started to do this it was very, very tough. They make it look easy on television and when you have the camera and you're trying to video people, it's very difficult. They don't do what you want to do and the weather doesn't cooperate with you and maybe the camera breaks down and you're tired and you can't get the video shots that you want and it becomes like a game or struggle. Trying to get the best shots, trying to get the most interesting shots and it is like a game, a fun and frustrating game but by the end of the trip, we managed to get all of the video. And we put together a very interesting three minute video and a couple of Indian video producers helped us put this together. And you can see the short video on the web site - www.eagarbros.com and I think you'll like it. It's full of surprises and full of funny and strange sites and full of action so, it's pretty good. I think you'll like it.

We did a fun and difficult journey across India in a rickshaw.

In the past a 'rickshaw' was a cart with two wheels that was pulled by one or two men and used for transportation in India and other parts of the world. In modern times most rickshaws are motorized and pulled by a motorcycle.  Jeff used a motorized rickshaw to travel. Notice the following:

A rickshaw is a cross between a car and a motorcycle.

If something is a 'cross' between two things it is a combination of the two and has characteristics of both. Notice the following:

It was difficult, because the weather doesn't cooperate with you.

When something or someone works with us to make something easier we can say it is 'cooperating.' When you talk about the weather not cooperating you are saying it was bad weather for what you were trying to do. Notice the following:

We struggled to get the best and most interesting shots.

In this case 'shots' refers to a video recording or photos of a place or an even. Notice the following:

We did put together a very interesting three-minute video.

When you 'put something together' you make or create it. Notice the following:

265 Childhood
Lois talks about some of her earliest memories.
﻿
INT 4
Jeff

263 Family Wedding
Travis talks about a wedding he has to attend.
﻿
INT 4
Jessica