Gabrielle talks about her hometown. 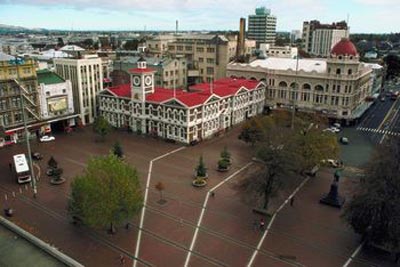 Todd: Gabrielle. Now, Gabrielle you talked to us last year.

Todd: And you said that you're from Christchurch?

Todd: OK, can you talk about your city?

Gabrielle: Absolutely! Absolutely! Well, Christchurch I guess compared to Japan is pretty small, but for New Zealand it's quite a big city. I think it's a great place. Yeah, we've got the beach, the mountains, yeah so city center and nature, really close.

Todd: Sounds nice! How many people live in Christchurch?

Gabrielle: Oh, that's a good question. Gosh! Were certainly not up to a million! I guess about 600,000 people.

Gabrielle: Well, I use my bike usually or a car. We certainly don't have the trains like Tokyo, but there's a bus system. It's not too bad, but most Kiwis have cars. Yeah, more convenient.

Todd: OK, now can I ask you about costs?

Todd: OK, and you can say Japanese yen prices.

Todd: How much is an apartment? A one bedroom apartment, downtown?

Gabrielle: Well, to be honest we don't have that style. We've got plenty of space so we usually rent a house which has three bedrooms and a garden, for example, and much cheaper, much, much cheaper. I'm just trying to convert.

Todd: Three bedrooms and a garden!

Gabrielle: Yeah! And often we go "flatting" which means we share the house with maybe a couple of friends, probably pay about, I was paying $80 a week for my room so, oh, sorry my conversion rate is not working too quickly at the moment.

Gabrielle: It's incredibly cheap. Yeah, much, much cheaper! Much bigger!

Gabrielle: A loaf of bread! To get the good bread, probably about $2.50 a loaf, yeah, so, maybe about, oh sorry, my conversion's not working, I've been in Tokyo for too long!

Todd: How about a movie ticket?

Gabrielle: A movie ticket would be about $13, so it's much cheaper than here. Yeah, definitely!

Todd: How about if you're going to buy your friend a sweater, a nice sweater, how much would that cost?

Gabrielle: Well, I like the good outdoor brand sweaters so I would probably say about $50 but an everyday sweater you could get about $15 New Zealand. Yeah.

Todd: OK, Wow! Sounds like a great place. Oh, and last one, the weather, when is the best time of year to visit?

Gabrielle: Yeah, so we're going into summer now so December to February, but we have four seasons in one day, so you can count on all weather even within summer. Yeah! Yeah!

Todd: Do you have a really bad month to go, where the weather is not nice?

Gabrielle: Yeah, usually June, July, it probably rains the most, but we still get gorgeous sunny days in the winter so, yeah there's not really any bad time.

'Transportation' is the type of vehicle or system you use to get from one place to another. Buses, cars, trains and airplanes are all forms of transportation.

When something is 'convenient' it is easy or comfortable to use. Convenient things make life easier.

When you go 'flatting' it means that you share an accommodation with other people. Doing this would be a good way to make accommodations cheaper for everyone.

How much is a loaf of bread?

A 'loaf' is the standard shape that bread is baked in.  When we eat bread we cut pieces from the loaf, so the loaf is all the pieces of bread together in one object.

I would probably say about $50, but an everyday sweater you could get about $15.

An 'everyday sweater' is a piece of clothing to be worn on the top part of your body, like a pullover, that you wear for casual occasions.