Ruth tells Todd about her time in Sweden. 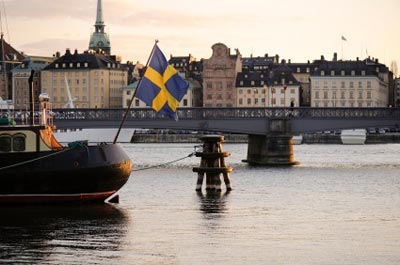 Todd: So, Ruth in Europe, have you traveled much?

Ruth: Yeah, actually, um, well, when I was younger I went on a tour around all of Western Europe and then when I was at university I backpacked around Scandinavia for a month with a friend. (Nice!) It was really nice, actually, yeah.

Todd: So were you out in the wilderness, or were you just going from village to village?

Ruth: Really we just, we arrived in Stockholm. We went around Stockholm. We went to Oslo. We spent most of our time in the cities, although everything was so expensive. We ended up sleeping in youth hostels or on people's floors.

Todd: What do you remember most about your trip?

Ruth: Um, probably just having no money, so we couldn't eat really for a fortnight.

Todd: Actually, in terms of food, what do people in Scandinavia usually eat?

Ruth: Um, I think they eat a lot of potatoes and meat and things. I'm not sure really what a typical Scandinavian meal would be.

Todd: That's OK. You didn't have any money to buy any food right?

Todd: Yeah, silly question. Um, so what do you remember most about Stockholm?

Ruth: Ah, they've got some really nice buildings in Stockholm. I've got relatives who live in Stockholm so we stayed with them, and also it was really hot when we went there, but it was also very pricey.

Todd: So in every store you went into were they playing ABBA?

When I was at university, I backpacked around Scandinavia for a month with a friend.


'Backpacking' is a common method of travel for young people or people trying to travel on a budget.  Notice the following:

ran out of money

We never actually made it to Finland, because we simply ran out of money.


You 'run out of money' when you spend all the money that you have.  Notice the following:

Everything was so expensive, so ended up sleeping in youth hostels or on people's floors.


A 'youth hostel' is cheap hotel, where young people can stay in dorm-style rooms.  These are very popular with backpackers.  Notice the following:

We just had no money, so we couldn't eat really for a fortnight.


'Fortnight' is another way of saying 14 nights and days or 2 weeks.  Notice the following:

Stockholm is really nice, but it's also very pricey.


If a place is 'pricey,' it is expensive. Notice the following:

454 Bargains
Ruth talks about her passion for bargains.
﻿
INT 4
Ruth

453 Being Vegetarian
Ruth talks about why she is a vegetarian.
﻿
INT 4
Ruth

452 Veggies
Ruth and Todd talk about the vegetables.
﻿
INT 4
Ruth

451 Life in Sweden
Ruth tells Todd about her time in Sweden.