Ruth and Akane talk about onsens in Japan. 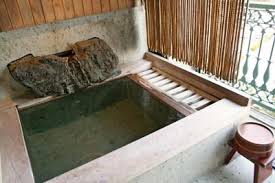 Akane: So, what did you do today?

Ruth: That's a good question. Actually, today, I went to the onsen.

Ruth: An onsen is a public bath and people go there, basically just to sit in hot water, and it's, it's a bit like a spa and it's really relaxing. You just sit there and don't do anything really because it's so warm. It's really nice.

Akane: Oh, OK. Well, what did you think about it?

Ruth: I really enjoyed myself. I'd never been to an onsen before, so today was my first experience and I am quite British and you have to go in with no clothes on so I was a little bit concerned about that, but it went OK.

Akane: Oh, OK. Well, are you going to tell your friends and family that you did that?

Ruth: Um, I think probably I will tell them, and I think they might listen to this actually, so

Akane: And how do you think they'll feel about that?

Akane:OK, well, actually, I've been to an onsen too before.

Akane:Yes I have. I actually, do really enjoy it. I think it's very relaxing. If you go to the big onsens, they have lots of different kinds of baths and one of them is called the "Electric Bath" and when you go into it you feel little tiny electric shocks and it's supposed to be good to increase your blood circulation, apparently.

Ruth: Does it hurt?

Akane:When I went into that one I was very little, so I thought it hurt and I didn't really like it.

An onsen is a public bath, and people go there basically just to sit in hot water.


A 'public bath' is a communal place where people can go to relax in hot water. Notice the following:

An onsen is a bit like a spa and it's really relaxing.


You go to a 'spa' to relax or get a massage.  When something is 'relaxing,' it helps you reduce stress.  Notice the following:

You have to go in with no clothes on, so I was a little bit concerned about that.


If you are 'concerned about' about something, it makes you feel a little bit worried or nervous.  Notice the following:

The big onsens have different kinds of bath, including one where you feel little tiny electric shocks.


An 'electric shock' is like a flash of electricity into your body.  It usually doesn't hurt too bad, but scares you and makes you move away from what shocked you.  Notice the following:

Apparently, the "Electric Bath" is supposed to be good to increase your blood circulation.


Your 'blood circulation' is the movement of blood through your body. Notice the following:

464 Children with Phones
A debate about children having mobile phones.
﻿
INT 4
Ruth

463 Seasons
Ruth talks about the change in seasons.
﻿
INT 4
Ruth